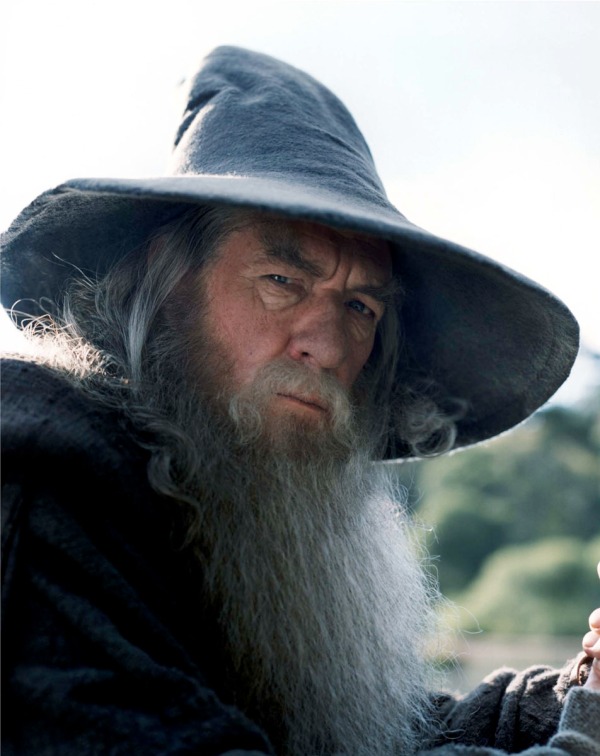 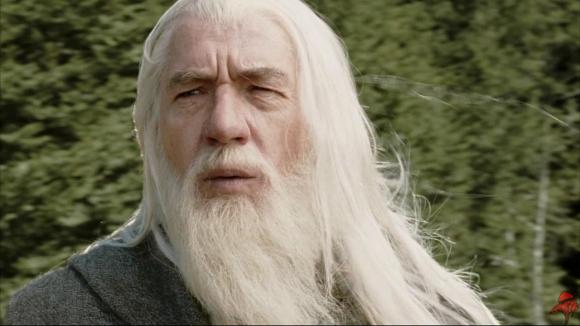 It isn’t just The Hobbit and The Lord of the Rings. No science fiction or fantasy saga is complete without a wise old bearded God-like figure often played by a theatrical knight who occasionally fights, usually dies but like E.T himself (or the MP John Stonehouse) comes back later.

Spoiler alert:  John Stonehouse came back ages ago (look it up)…

Does he die? Yes. Gandalf the Grey falls down the crack thanks to the big fiery Balrog thing in The Fellowship of the Ring.

Does he come back? Yes. As Gandalf the White in The Two Towers.

Who played him? SIR Ian McKellen

Fun to play? McKellen seems to have enjoyed it and apart from the “insane laughter” scene in Frodo’s bedroom in the third film has done a great job of it.

Is he Jesus/God?: No. JRR Tolkien was keen to emphasise the books were not supposed to be allegorical.

Does he die? Yes. Darth Vader turns him into a dressing gown towards the end of the first (or fourth) film.

Does he come back? Only as a badly animated and well paid ghost. Bet Marlon Brando wished he’d thought of that for the Superman sequels? Although he’d have been too fat anyway.

Who played him? SIR Alec Guinness and Ewan McGregor as the younger sometimes un-bearded Obi Wan in the inferior prequels.

Fun to play? Not at all. “…new rubbish dialogue reaches me every day on wadges of pink paper – and none of it makes my character clear or even bearable,” Guinness complained. He also resented being nicknamed “Mother Superior” by a young Harrison Ford. Understandably. Sir Alec made a small fortune, however, having claimed a 2 ½ % share of the profits on the three films although thanks to the exorbitant tax rates in the 1970s, not as much as is commonly thought. MacGregor’s complaints about filming against blue screen, meanwhile, were amongst the first bits of negative publicity to break around The Phantom Menace in 1999.

Is he Jesus/God?: Perhaps. But then, a similar case could be made for Han Solo. And Harrison Ford was a carpenter, just like Jesus was. See? It all makes sense.

First appeared: (in print) 1997 Harry Potter and the Philosopher’s Stone and on screen in the 2001 film.

In the US this was called: Harry Potter Can’t Believe Americans Don’t Know What A Philosopher Is and Apparently Think A Sorcerer is Basically the Same Thing.

Does he die? Yes. Snape (Alan Rickman) chucks him off Hogwarts at the end of the penultimate volume The Half Blood Prince. In the film, his death is reminiscent of Alan Rickman’s own character’s death in Die Hard. Except Bruce Willis wasn’t involved.

Does he come back? Only in a dream sequence.

Who played him? Richard Harris until his death after the second film. Succeeded by SIR Michael Gambon thereafter.

Fun to play? Ignoring the fact the Irish Harris didn’t actually have an Irish accent when playing Dumbledore (who isn’t, as far as we know, supposed to be Irish), the usually excellent Gambon for some reason initially put on a somewhat half-arsed Irish accent when he took on the role. Happily, this soon went and he was great from then on.

Is he God/Jesus?: Probably not, although like Jesus he is gay. JOKE. No, in reality, Dumbledore was not really gay.

Nearly there but not quite:

Aslan in the Narnia books

He does die, come back, is wise, bigoted, bearded and is very clearly supposed to be God. He is not a man though. HE IS A LION.

Wise counsel to feline Skywalker-type Lion-o, Jaga dispenses important nuggets of wisdom such as encouraging him to enter his litter tray regularly but dies en route from the Thundercats’ home planet of Thundera to Third Earth. He does come back as a ghost though and fits the bill very well. However, he is rather transparently (literally) “heavily influenced” by the character of Obi Wan Kenobi. Also, unlike everyone else Jaga isn’t feline at all. This isn’t explained.

No one in His Dark Materials

A big fantasy saga, yes but with NO bearded wise God-like grandfather figure. Perhaps reflecting the atheistic nature of the plot.

Optimus Prime in The Transformers

A robot, yes. But he was wise and dies (in 1986’s Transformers The Movie) and later comes back. He may die in the new films too. Who knows? I was asleep.