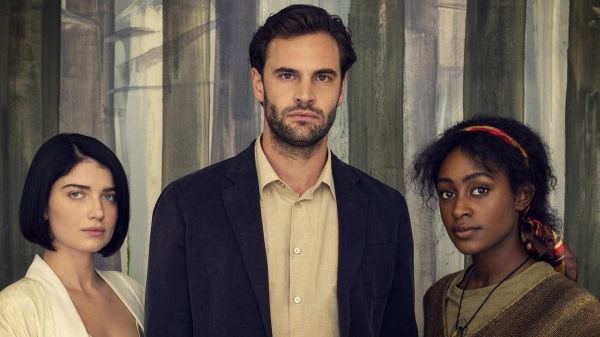 Louise Barnsley (Simona Brown) leads an ordinary enough life. She is divorced and lives with her young son, Adam (Tyler Howitt) in London. She enjoys her job working at a psychiatrist’s office. She gets on well with her main colleague Sue (Georgie Glen) and has another good friend outside work, Sophie (Nichola Burley).

She does, however, suffer from night terrors and is haunted by dreams in which she wonders down creepy Clive Barker-esque corridors and which see her son see endangered in various ways. These nightmares often cause Louise to sleepwalk: potentially a serious problem as she lives in a high-rise flat with a balcony.

One day, she literally bumps into Adele (Eve Hewson, the daughter of U2 musician, Bono) who she recognises as the wife of her new boss, Dr. David Ferguson (Tom Bateman). This is awkward as Louise and David have already kissed on a night out, shortly before David started the job. At that point, Louise had had no idea either that David was already married or that he was about to become her new employer. The kiss would doubtless never have happened if she had. Things get more awkward still when Adele who is very beautiful but clearly very lonely starts pushing hard to befriend Louise. Louise is initially wary: Adele does not, of course, know about the kiss and Adele doesn’t want David – who seems to be very controlling and possessive – to know about her friendship with Louise. Without really meaning to, Louise has thus got into a position where she is deceiving both sides of the Ferguson marriage at the same time. On the plus side, Adele does seem to have a possible intriguing solution to Louise’s night terrors.

On top of all this, the Ferguson marriage seems to be a loveless nightmare. David is clearly miserable, drinks heavily and seems to be attempting to control Adele through a regimen of prescription pills. He clearly expects her to stay at home all day in their large but sterile home while he goes to work. A series of flashbacks to the late 2000s, meanwhile, reveal a younger happier Adele befriending a young Scots drug addict, Rob (Robert Aramayo) while both are apparently staying at a rural psychiatric institution.

What is the truth behind Adele’s troubled past? Who exactly was Rob and what happened to him? What does the well, which keeps appearing in the flashback sequences, have to do with anything? Why are David and Adele so unhappy together? Is David manipulating Adele? Is Adele manipulating him? Are they both manipulating Louise and if so, why? What exactly happened to Adele’s family? Is there something suspicious about Louise’s friend, Sophie? Why are there pigeons everywhere? Can Louise disentangle herself from this mess?

This compelling new six-part Netflix thriller from Steve Lightfoot and based on Sarah Pinborough’s 2017 novel raises many such questions and will keep you guessing right until the very final scenes.