The Tories seemed to be doing rather well in 1987. Mrs Thatcher had beaten the unions, the Wets and the Argentines. She now seemed set to do the same for her third Labour electoral opponent, Neil Kinnock just as she had thwarted both Jim Callaghan and Michael Foot before. The economy was enjoying a brief economic boom. Thatcher, apparently invincible but not yet obviously unstable, looked unstoppable. The NHS, crime and homelessness figures were all far worse than they had been, but no one was worrying about this then.

Labour, though much more polished than in 1983, thanks to the red rose symbol and other behind the scenes innovations by the then largely unknown Peter Mandelson, were well on the road to becoming New Labour, this would propel it to a massive victory a decade later. But in 1987, the party still looked vulnerable as did the Alliance led by the “two Davids” Owen and Steel. In Peterborough, Brian Mawhinney seemed safe against his Labour foe Andrew MacKinlay (who would later be MP for Thurrock between 1992 and 2010).

But as Lt. Col. Oliver North frequently said in the Iran-Contra hearings at about this time: “I was not aware” of all these things.

I was ten. I was in my third year (that is, Year 5) of my Junior School. I liked Whizzer and Chips, Buster and Oink! comic (none of these are still going) and books like The Demon Headmaster and The Turbulent Term of Tyke Tyler. I used to draw and write my own stories, sometimes in cartoon form, on Peterborough Development Corporation paper which my dad would bring home from work. He is retired now and the PDC no longer exists, so I hope my revealing this, doesn’t get him into trouble..

I liked riding my BMX round the park and swimming in the Regional Pool (not the Lido so much, as that was freezing). I could very nearly swim and cycle by 1987, though not simultaneously. I was never fat but disliked sport. I loved history. I was not the film buff I have become but I was already a big Blackadder fan, even though it was often unsuitable for a ten year old. I used to play very slow Atari 800XL computer games and fight with my younger brother (six). My older brother was just finishing his time at Reading University while my sister, just two months off being old enough to vote was then finishing her A levels.

This was the first election I was aware of. I was not hugely impressed by any of the parties and had not yet developed any feelings of loyalty towards them. I found Mrs. Thatcher’s affected way of speaking rather grating, as indeed my mother did and still does. But Neil Kinnock seemed boring when he appeared on Wogan. The Alliance roused no strong feelings within me either. I understood bar charts well enough from my Scottish Maths books to see that the Tories were going to win. 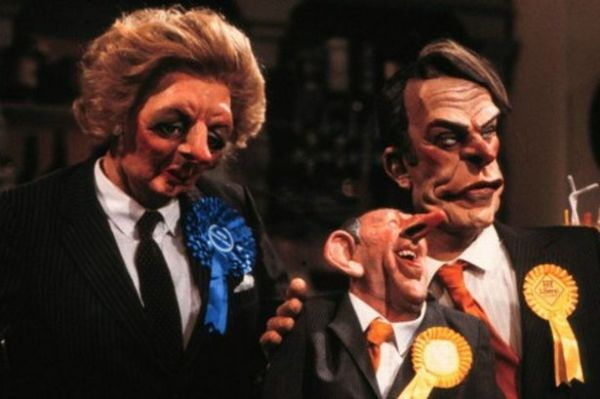 My third year teacher Mrs. Field (not her actual name) organised a mock election.The Tory candidate, a bright promising girl, was something of a favourite. As in all subsequent elections, I became emotionally involved but didn’t make a speech or do anything that involved work. Speeches were made by anyone, not just the three main candidates. I think the Tories would have won the mock election anyway but Mrs. Field was hardly an impartial arbitrator. Generally everyone made meaningless speeches e.g. “The Conservatives will build lots of houses” or “Look up “liberal” in the dictionary and it means…” or “Labour will make the schools better”. If someone spoke up for Labour though Mrs. Field would sometimes interject with something like: “but how will Labour pay for all this? With higher taxes!” Taxes sounded evil to our childish ears then. Even though, in retrospect, they might have got us a proper classroom rather than the mobile one we were then sat in.

These interjections prompted a few people to defect from Labour to Tory, ultimately pushing them into third place. The Labour candidate was a decent boy and a friend. I regret to say for the first and only time I VOTED CONSERVATIVE MYSELF.

Yes, I know it wasn’t a real election and I admitted it at the time before I did it. My family weren’t impressed, but knew I was only a child. In time, I would be the only one of us to become a Labour Party member. But in 1987 I probably just wanted to back a winner.
But I’m not proud of myself.

The Tories won a 100 seat majority nationwide and the first plans for the Community Charge were announced soon afterwards. John Major won Mawhinney’s neighbouring seat of Huntington for a third time too. He won his first position in Cabinet straight after the election, became Foreign Secretary and Chancellor in 1989 and finally Prime Minister just three years later in 1990.
The Tories won in the class Mock Election comfortably too, the Tory candidate later becoming an actress. Mrs. Field died about twenty years ago and most people involved, now like me, fast approaching forty, have probably forgotten about the school election completely.
But by the next election in 1992, I would be fifteen. Still not old enough to vote but by then firmly in the Labour camp.

2017 update: I no longer regret not voting for the Labour candidate. I’d not seen him in years and he recently put a horrendously racist joke on Facebook. I de-friended him.