The hit Danny Boyle film, Yesterday envisages a world in which the biggest band of all time had never existed. But what if they really hadn’t? Consider…

First things first: the early series of Thomas The Tank Engine would not have been narrated by Ringo Starr. Someone else would have to have been found to do it instead, wasting considerable time and expense.

The career of the talented multimedia artist, Yoko Ono would have been allowed to continue without interruption, rather than being crudely sidetracked.

“Yellow matter custard dripping from a dead dog’s eye, crabalocker fishwife, pornographic priestess, man, you been a naughty girl, you let your knickers down, I am the eggman, we are the eggmen, I am the walrus, Goo goo g’joob”. Out of context, such lyrics would just sound like drug-induced nonsense. Imagine!

The career of fashion designer Stella McCartney would never have happened. This would obviously…er…have huge effects for everyone.

It is quite likely (although not certain) Linda McCartney’s vegetarian and vegan food range, would not have been launched. Julian Lennon would have not had a 1984 number 6 hit with ‘Too Late For Goodbyes’ either.

Pete Best would probably feel better about how his career has gone.

None of the Beatles’ post-Beatles careers would have occurred. Imagine no Mull of Kintyre. No Frog Chorus. So This Is Christmas. Imagine no…Imagine.

The film explicitly stated that the Beatles-influenced Oasis had never existed either, in which case, isn’t it a bit surprising Jack didn’t have a go at an Oasis track too? Although perhaps not Cigarettes and Alcohol, as cigarettes are another one of the things that don’t exist in this world. One wonders if Oasis would still have existed in some form anyway or how strongly they or other bands would have been affected by the Beatles’ absence. Would Madonna sound the same? Would Lady GaGa? Would Martin Amis have written in the same way? Ultimately, we will never know.

The Monty Python film, The Life of Brian would not exist as it owes its existence to George Harrison financially bailing the film out, as he wanted to see it himself. Eric Idle’s post-Python parody, The Rutles would also not exist.

Needless to say, the Beatles’ films, A Hard Day’s Night, Help! and Yellow Submarine would never have been made without The Beatles. Nor would any films inspired by them such as Backbeat, the little-seen Across The Universe. Or Yesterday. 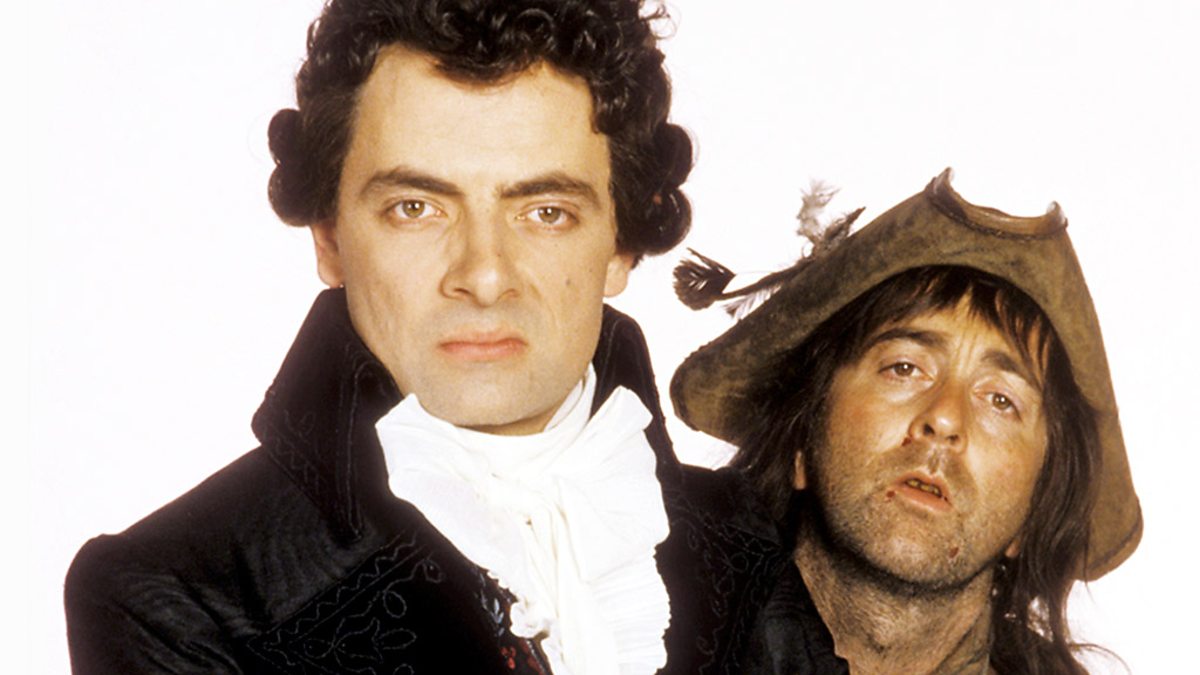 This article (written by me) has been reproduced with the kind permission of Chortle. It first appeared in 2012.

‘I want to be remembered when I’m dead. I want books written about me. I want songs sung about me. And then, hundreds of years from now, I want episodes of my life to be played out weekly at half past nine by some heroic actor of the age.’ (Edmund Blackadder, Dual and Duality).

It has now been a full quarter-century since the first screening of Blackadder The Third. Under normal circumstances, the anniversary of the third series of anything would not be a cause for comment. Yet Blackadder is not a normal programme and the third series alone must rank as one of the best sitcoms of the Eighties in its own right. 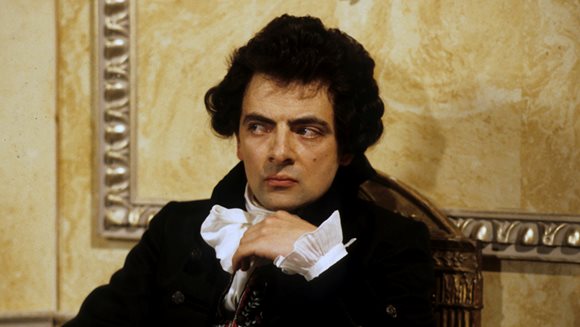 Continuing the slow social decline of the Blackadder family (from 15th Century royalty in the first series to a 20th Century Army officer by the fourth), Blackadder the Third, sees Edmund (Rowan Atkinson again) reduced to the role of butler to the idiotic foppish Prince Regent played by the then still-up-and-coming twenty-something Hugh Laurie. Despite having played two different roles in Blackadder II, as the drunken innuendo-obsessed Simon ‘Farters’ Partridge (‘Sounds a bit rude doesn’t it?’) in the acclaimed series 2 episode, ‘Beer’ and the cast’s Teutonic nemesis Mad Prince Ludwig in the final episode ‘Chains’ (‘Yes! I was one of the sheep!’), Laurie was reportedly tremendously nervous about taking on the part.

It’s easy to see why. The standard set by the second series had been incredibly high and with the regular cast slimmed down (Miranda ‘Queenie’ Richardson and Tim ‘Lord Percy’ McInnerny appear in only one episode each in new roles), a lot of weight was on Laurie and Atkinson’s shoulders, even with the excellent Tony Robinson returning as Baldrick (or rather ‘Mr S. Baldrick’). The introduction of a new character, pie-shop proprietor Mrs. Miggins (Helen Atkinson-Wood), a character referred to in Blackadder II but never seen, frankly doesn’t help the series much.

Thankfully, virtually everything else does. Hugh Laurie is perfect as Prince George, a good-natured, if lazy and spoilt clot who seems incapable of recognising his butler’s insults even when he says them directly to his face. The part would in fact be the perfect preparation for perhaps Laurie’s most successful Nineties role as Bertie Wooster, opposite a less hostile servant.

This is still not the best series of Blackadder, a position which still belongs to Blackadder II. Historically, it’s a bit confused – George is repeatedly referred to as the Prince Regent, a position he didn’t hold until 1811, by which time he was corpulent and in his fifties. Yet virtually everything else in terms of costumes and references suggests this is set in the 1780s or 1790s, while Samuel Johnson’s dictionary, the subject of one episode, was published before the Prince was actually born. 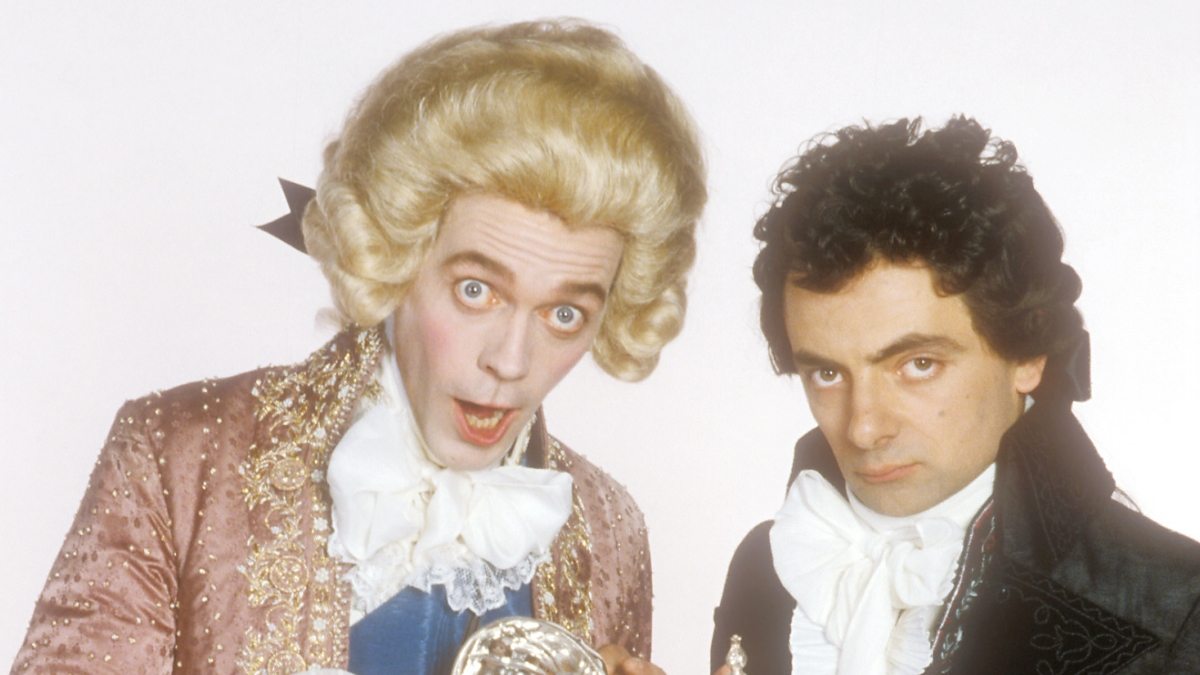 Despite a few good lines and an excellent cameo by the late political reporter Vincent Hanna, the opening election-themed opening episode is perhaps also bit iffy by Blackadder standards. A few episodes also rely a bit too heavily on fictional versions of real characters such as Dr. Johnson (Robbie Coltrane) and the Duke of Wellington (Stephen Fry) being homicidal maniacs. They were not.

Happily, though, most of the series is sublime, reaching a peak with the brilliant closing episodes ‘Amy and Amiability’ and ‘Dual and Duality’. Blackadder’s run-in with a squirrel-hating highway woman and a memorable scene in which Hugh Laurie’s Prince is repeatedly punched make up two of the best Blackadder episodes ever produced.

And (is a spoiler alert necessary 25 years on?) the series uniquely sees a happy ending for Blackadder himself, with the butler rather confusingly replacing George as heir to the throne. Are we to assume all subsequent royals are in fact descended from him?

It hardly matters. What’s undeniable is that this remains one of the finest British sitcoms ever produced. 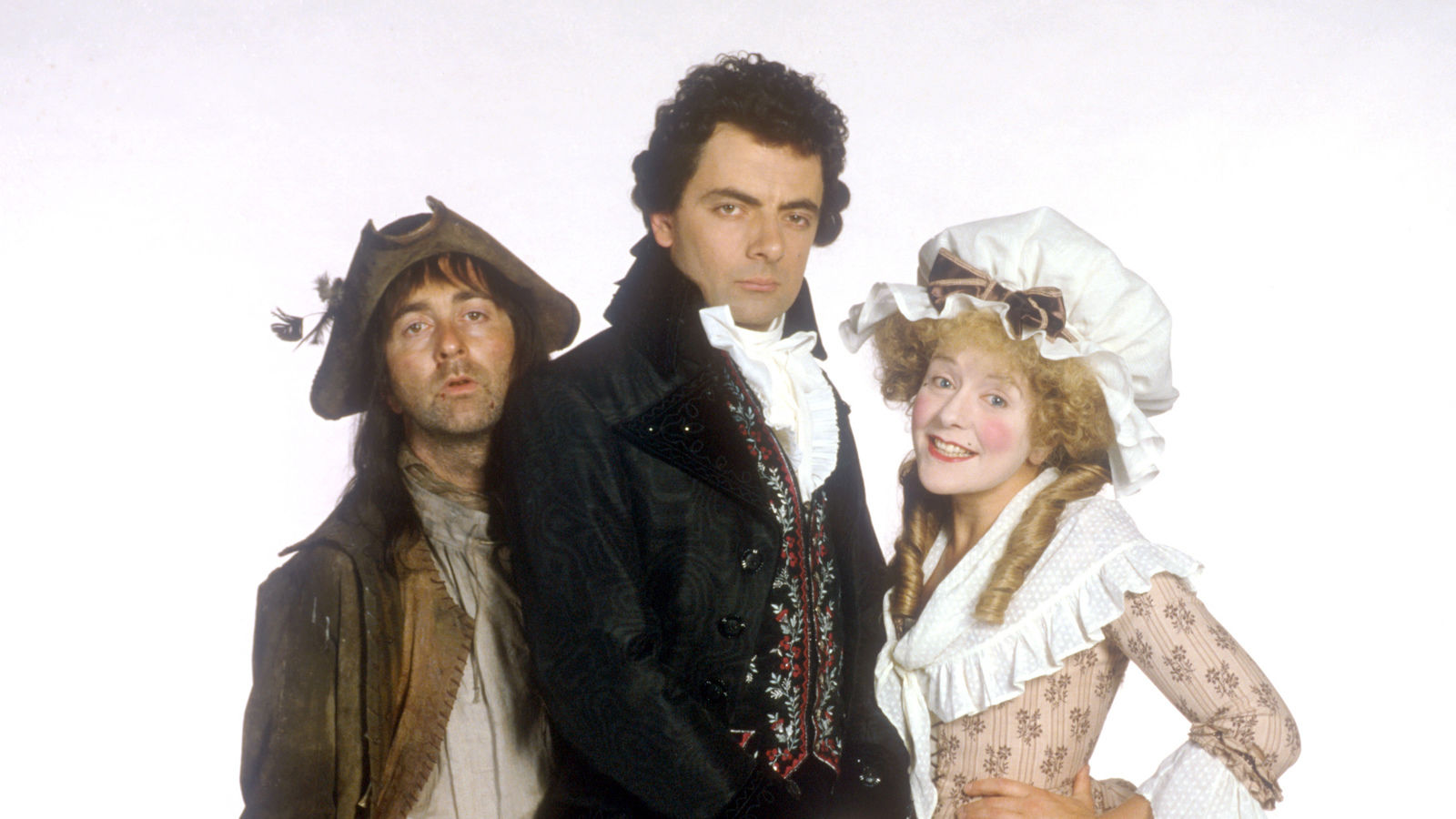 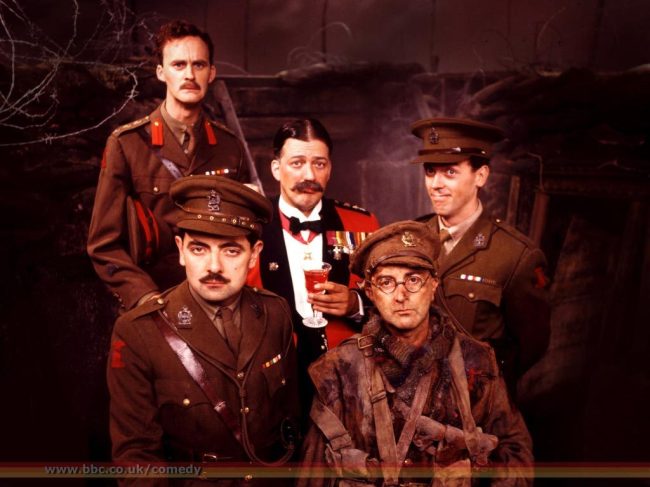 The year 2014, as every schoolboy knows, marks an important anniversary. It is twenty five years since the final series of perhaps the best British sitcom of all time, Blackadder: Blackadder Goes Forth.

It is a shame then, that some have used another anniversary (the centenary of the outbreak of the First World War) to attack the much loved series.

Unpopular Education Secretary Michael Gove is only the latest to do so, launching a broadside at the sitcom during a wider attack on “left-wing versions of the past designed to belittle Britain and its leaders” in The Daily Mail.

“The conflict has, for many, been seen through the fictional prism of dramas such as Oh! What a Lovely War, The Monocled Mutineer and Blackadder, as a misbegotten shambles – a series of catastrophic mistakes perpetrated by an out-of-touch elite,” Mr. Gove has written.

Gove seems to have thrown Blackadder into the attack almost as an afterthought. Blackadder is not , after all, a “drama”. Watching the series again, it is difficult to understand what he is on about.  It is hard to see where, for example, he feels Blackadder “excuses Germany of blame” for the war. 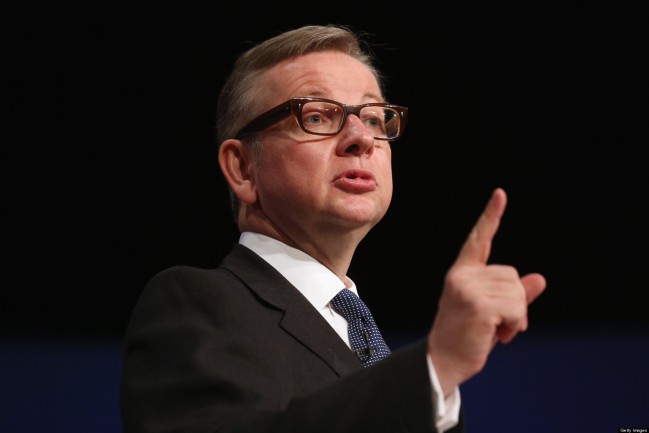 Presumably, he is unhappy with the portrayal of the real life Field Marshall Haig by Geoffrey Palmer in the last episode. At one point, Haig is shown callously brushing “fallen” toy soldiers off a replica battlefield with a dustpan and brush. The Education Secretary also doubtless dislikes Stephen Fry’s portrayal of the buffoonish General Melchett.

“We’re right behind you!” Melchett reassures Baldrick (Tony Robinson) as he sets off for the Front.

Gove points to new revisionist histories which he says paint both the role of Haig and the merciless slaughter of the Battle of the Somme in a new light. But it is unfair to attack Blackadder for this. Not only were these new interpretations not around in 1989 when the series was made but they are highly questionable anyway. Gove argues that the Somme which occurred in 1916, more than two years before the end of the war in November 1918 can now be viewed as a “precursor to victory”.

It is worth remembering that on the first day alone of the Battle of the Somme, British fatalities alone were close to twenty thousand, seven times the entire number of deaths from the World Trade Center attacks in 2001. And not a single British General died on the Somme.

Although the Daily Mail has captioned pictures surrounding Gove’s words with phrases like “Captain Coward” for Blackadder himself, this is unlikely to be a view shared by many who viewed the programme. The series, of course, ends with all the main characters charging wilfully towards death on No Man’s Land. They know they are probably going to die, but proceed anyway. What on Earth is cowardly about that? Gove argues that: ”For all our mistakes as a nation, Britain’s role in the world has also been marked by nobility and courage.” Nobility and courage? Don’t the deaths of Captain Blackadder, Lieutenant George, Captain Darling and Private Baldrick perfectly exemplify these qualities? 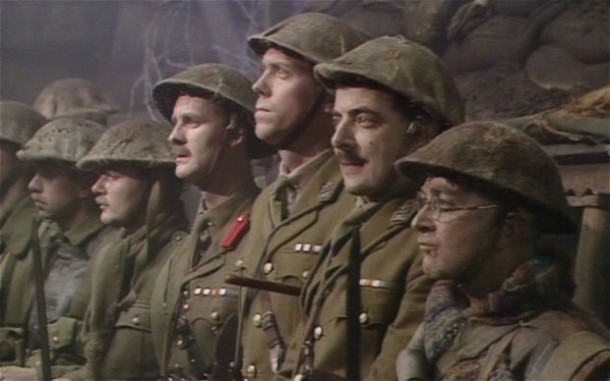