Stand down Margaret: The Princess (Lesley Manville) faces up to the truth

Did you know the Queen’s sister once very nearly married James Bond?

Well, okay, that didn’t exactly happen. But in this episode, the Queen’s younger sister, Princess Margaret (the brilliant Lesley Manville) meets up with her first love, retired equerry, Group Captain Peter Townsend. And he’s now played by Timothy Dalton, who once famously played 007. You see what I mean? Dalton was, in fact, still officially cast as James Bond in 1992 the very year this episode was set. For all that matters.

It’s all quite poignant. As depicted in The Crown: Season 1, the official refusal to allow the young Princess and the divorced Group Captain (then played by Vanessa Kirby and Coupling star Ben Miles: both seen here in flashback) effectively wrecked poor old Margaret’s life. He went on to marry someone else, happily and successfully. She married too: disastrously, leaving her bitter, boozy and resentful. However, here they get to meet one final time. This apparently did happen but not in quite the way it happens here. Margaret is left shaken not stirred as he woos the living daylights out of her (apologies).

There’s some more dramatic licence here: we see Townsend listening to Margaret being interviewed by Roy Plomley on Desert Island Discs as if this occurred, like the rest of the episode in 1992. In fact, as all true BBC Radio 4 fans will know, that particular episode was broadcast in 1981. Plomley died in 1985, in fact, so it is rather surprising to see him still alive seven years’ later.

Anyway, it becomes clear there is still some lingering tension between the Queen (Imelda Staunton) and Margaret over the issue although this all seems to be resolved by the end of the episode. Lesley Manville is great as ever as Margaret. You have to wonder if she was ever considered as a possible option to play the Queen herself

Talking of which, the Queen has a lot on her plate this time. Royal divorces are like buses. You wait ages for one and then three come along at once. First, Anne (Claudia Harrison) wants to remarry after her divorce. This provokes anguished complaint from Margaret. If she can do it, why couldn’t I? In truth, the situations are not actually identical. Anne is the daughter of the Queen not her sister. Anne is also the divorced one in this instance, not her proposed husband. Margaret has also now been permitted to get divorced herself and could presumably remarry if she wished. Margaret also was given the option of marrying Townsend if she was prepared to relinquish all claims on the throne. That said, none of these points are brought up here and Margaret is certainly justified in feeling aggrieved. For the record, Anne’s second marriage to Vice Admiral Timothy Laurence has now lasted for thirty years. It is the most enduring of any of the six marriages entered into by the children of the late Queen Elizabeth II.

Next up, the now disgraced Prince Andrew (James Murray) announces his marriage to the toe-sucking Fergie is over (no, not the football manager or the one from the Black Eyed Peas). Worst of all, the once and future king, Charles (Dominic West) confirms his marriage is over too. Then Windsor Castle burns down. If the 1990s was the worst decade of the Queen’s reign, then 1992 was the worst year. Perhaps of her entire life.

This prompts the famous Annus Horribilis speech in which the Queen admits that 1992’s been as Francis of Assisi might have put it “a complete and utter shitshow”. The Queen Mother (Marion Bailey) objects to the speech: in a touching scene Philip (Jonathan Pryce) and the Queen defend each other. None of the conversation apparently really happened. It doesn’t really matter: the speech undeniably marked a shift away from the stiff upper lipped attitudes of the past towards the “I feel your pain” approach of the post-Diana era.

The story so far: Against all the odds, ordinary London girl and granddaughter of King George V, Elizabeth Windsor has risen to become Her Royal Highness, Her Majesty, Queen Elizabeth II. Having seen off many perils during her first forty years on the throne including her wayward, drunken sister, Margaret (Vanessa Kirby/Helena Bonham Carter/Lesley Manville), unstable palace intruder, Michael Fagan (Tom Brooke) and non-U-turning, ex-Europhile, Iron Lady, Great She Elephant, Margaret Thatcher (Gillian Anderson), she now faces her greatest enemy of all: HER OWN CHILDREN. Can the Queen resolve the mystery of the Annus Horribilis? Can this series avoid overlapping with the storyline of the film, The Queen, also written by Peter Morgan nearly twenty years ago? And can the Queen work out why after nearly thirty years as Olivia Colman, she has now suddenly turned into Imelda Staunton? For the answers, read on… 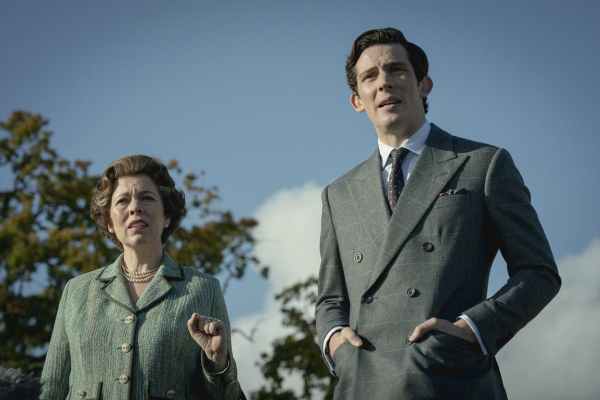 So far, most of the episodes in this series can be easily divided into ‘Princess Diana’ episodes or ‘Margaret Thatcher’ episodes. At one point, in this one, we see Princess Diana (Emma Corrin) struggling through her pregnancy with the future Prince William as her husband, Prince Charles (Josh O’Connor) shouts at her through a door.

But otherwise, this is a Margaret Thatcher episode.

It’s 1982 and when we first see her in this episode, Mrs T (Gillian Anderson)is up in arms, not because of mass unemployment or the recession but because her son Mark (Freddie Fox) has got lost in the Sahara desert while taking part in the Sahara-Dakar Rally. Mark is soon recovered safe and well, but the Queen is surprised to see a more vulnerable side to the Iron Lady in the meantime. She is also surprised by the Prime Minister’s undisguised favouritism for her son Mark over his twin sister Carol (Rebecca Humphries in a role played by Olivia Colman herself in the 2011 film, The Iron Lady). Here, as in reality, Mark is spoilt rotten by his mother, becoming brash and overconfident, despite ultimately being pretty thick. Though genuinely intelligent, Carol, in contrast, comparatively ignored by her headstrong and domineering mother, has low self-esteem, only proving a success later in life as Mark proves a failure.

With some dramatic licence, the Mark Thatcher Sahara story here slightly overlaps with the start of the Falklands War. This wasn’t the case: there was in fact several months’ distance between the two events. It is thus unlikely Thatcher was venting feelings about her son when she reacted to the news of developments in the South Atlantic, as is suggested here.

Thatcher’s favouritism does prompt a teasing suggestion to the Queen from Prince Philip (Tobias Menzies) that all parents have their own favourite amongst their own children. Philip here is upfront in admitting his own favourite is Princess Anne, a prejudice many viewers will doubtless share largely thanks to Erin Doherty’s winning performance.

But who is the Queen’s favourite? Her Royal Highness (played by Olivia Colman who won an Oscar for her portrayal of Queen Anne in the film, The Favourite) arranges a meeting with each of her four children. She is briefed about each of them first, just to ensure she is up to date.

The Queen finds her daughter as dry and grounded as ever. And yet she is clearly miserable: annoyed by how she is portrayed in the media (particularly when contrasted with the newcomer, Diana) and, crucially, unhappily married.

Charles is unhappily married too and turning into a world class bore. The Queen reprimands him for his poor treatment of Diana and for continuing to see Camilla on the side.

For the first time we also get to meet the teenaged Prince Edward (Angus Imrie), who seems arrogant and is bullied at school. Despite being keen to go the Falklands, Prince Andrew (Tom Byrne) also already seems to be developing unsavoury attitudes and is clearly utterly fixated on his own chopper (his helicopter, I mean).

Little wonder as the Queen here concludes: Mark Thatcher may be the one to have gone missing. But it is her own children who seem lost.