Who should have been Prime Minster but never got the chance? 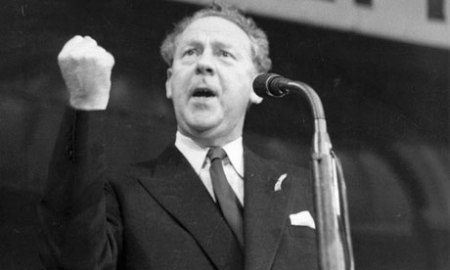 The case for: With the exception of Neil Kinnock, no post-war politician has done the hardest job in British politics (Leader of Her Majesty’s Opposition) for as long as Hugh Gaitskell did: over seven years. A youthful Chancellor during Attlee’s last days, Gaitskell had already made an enemy of the unofficial leader of the party’s Left, Nye Bevan. Always a right-winger in the party, Gaitskell struggled to prevent full blown civil war both before and after their heavy 1959 General Election defeat despite a tearful conference address in which he pledged to “fight and fight again” to save the party he loved. Tragically, just as Labour seemed to be finally pulling together, Gaitskell suddenly fell ill and died in early 1963. His successor Harold Wilson, boosted by Tory chaos after the Profumo Affair, led Labour back into power in October 1964. Many, particularly acolytes like George Brown and Roy Jenkins felt it should have been Hugh. Or failing that, them.

The case against: To be fair, the public never loved Gaitskell. He led Labour to defeat in 1959 and might have done again in 1964. As an adulterer himself (he was having an affair with James Bond creator Ian Fleming’s wife – some even suspected Gaitskell was poisoned by the KGB) he might have lacked moral authority during the Tories’ Profumo sex scandal. Wilson himself, indeed, only won power himself very narrowly after his election as leader prompted a surge in Labour popularity. Would Gaitskell have done the same?

The verdict: We will never know.

The case for: Jenkins’ spell as Home Secretary must rank as one of the most successful ministries ever. In just a few short years, he oversaw the abolition of capital punishment, ended the death penalty, legalised homosexuality and liberalised the abortion and divorce laws. Few politicians changed British life as much as he did.

The case against: With his posh manner, liking for the fine things in life and speech impediment, “Woy” Jenkins was often described as “nature’s old Etonian” even though unlike his colleagues Michael Foot, Denis Healey and Tony Benn, he was actually from genuine working class stock, in fact a Welsh mining community. But his position as a right-wing pro-European was unfashionable at the time. He scored poorly in the 1976 leadership contest following Wilson’s resignation and after a spell as President of the EEC returned as a founder member of the breakaway Social Democratic Party in 1981. The SDP really did seem set to win power for a period in 1981, but a combination of internal feuding, Thatcher’s Falklands victory and an unfair electoral system saw them perform badly in 1983, scoring almost as many votes as Labour but scarcely any seats. In old age, Jenkins advised Tony Blair on electoral reform  as a Lib Dem peer (Blair ignored him) and wrote numerous biographies of historical figures such as Gladstone and Asquith.

The verdict:  He never led Britain but undoubtedly changed the nation more than many who have.

The case for: Healey was a familiar figure on TV in the Seventies and Eighties, famed not only for his distinctive eyebrows and sense of humour but also for his formidable intellect, debating power and competence. An ex-communist and (like Jenkins) a Second World War veteran, Healey oversaw the British military disengagement “East of Suez”  in the Sixties and endured a rocky ride as Chancellor during the 1976 IMF Crisis, famously turning his car away from the airport where he was planning a conference trip abroad when the crisis grew too severe. In fact, the loan was later recognised as unnecessary and due to a treasury error. After Labour’s 1979 defeat, many were astonished when the elderly, scruffy and un-telegenic left winger Michael Foot beat the only slightly younger but far more popular Healey for the Labour leadership in 1980. Did the members planning to defect to the SDP vote for Foot in the hope of strengthening their cause? A few votes would have made all the difference. At any rate, Foot, though a decent and highly intellectual man proved a disastrous leader. The party split, the new SDP rejecting Labour’s new anti-nuclear and anti-EEC positions. Healey himself fought off a serious left-wing challenge for the Deputy leadership from Tony Benn in 1981. Both Labour and the SDP performed disastrously in the 1983 election. But Healey, to his credit, never deserted Labour.

The case against: Healey would have almost certainly fared better as Labour leader than Foot did after 1980 and may well have prevented the damaging SDP split. But whether even he could have prevented Margaret Thatcher being returned in the post-Falklands 1983 election (winning a majority of 144) is open to question. Particularly as Healey could sometimes be quite gaffe-prone himself during election campaigns, accusing Thatcher of “glorifying in slaughter” in 1983 and suggesting the Russians wanted a Labour victory before the 1987 contest.

The verdict: The best Prime Minister we never had? Perhaps. Lord Healey has now outlived virtually all of his ex-colleagues and rivals. He is ninety-six.

The case for: Labour was at a very low ebb indeed when John Smith was elected leader in July 1992. Labour had just suffered her fourth defeat, this time during a recession. Many doubted Labour would ever win again. As leader, Smith projected an air of competency which Michael Foot and Neil Kinnock had always lacked. Though his election as leader generated less excitement than Blair’s did in 1994, his strong often witty Commons performances, his success in abolishing the union block vote and the total Tory collapse after Black Wednesday, the pit closures, Back to Basics, the Maastricht Tory civil war and Tory sleaze made a Labour victory in 1996 or 1997 inevitable. His sudden death following a heart attack in May 1994 triggered a period of genuine mourning.

The case against: As the architect of Labour’s unpopular tax plans, Shadow Chancellor Smith is sometimes blamed for Kinnock’s 1992 election defeat. He was also accused of being too laidback as leader and effectively hoping victory would fall into his lap. However, despite no New Labour-esque attempts to woo business or the press, in 1994 Smith’s strategy seemed to be working.

The verdict: The Tory disintegration was so total under John Major that had Smith lived it is almost inconceivable that he would not have become Prime Minister. Had he lived, he would now be seventy-five.

The case for: Despite being the more experienced, better known and older of the two Miliband brothers, David narrowly lost the 2010 leadership contest to his brother Ed despite winning more votes from MPs and party members.

The case against: Although probably better on TV than his brother, David has endured image issues too (notably the “Banana Incident”) and lacked the killer instinct to take a stance for or against Gordon Brown at critical times in government. But ultimately his Blairism and (like Hilary Clinton in 2008) his support for the Iraq War and somewhat arrogant manner probably cost him victory.

The verdict: Unproven. Ed Milband seems neither as bad as his detractors say, nor his brother as good. And with David Miliband still under fifty, he could yet make a comeback. True, he’s not an MP. But then neither is Boris Johnson (who is the same age). The tragedy is that as brothers neither can easily serve under the other.