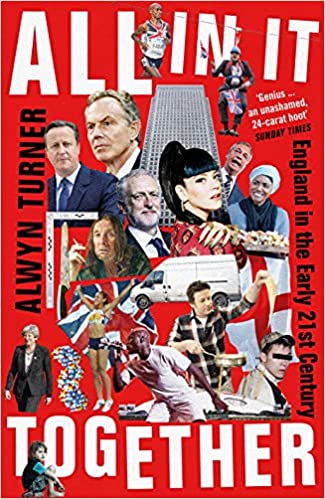 How soon is too soon to write about the history of a particular time or place?

Following on from his earlier three excellent volumes which took us from the start of the 1970s to the dawn of the new millennium, Alwyn Turner’s new book picks up the English story at the time of New Labour’s second massive General Election victory in 2001 before dropping us off again at the time of David Cameron’s surprise narrow win in 2015. The stage is set for the divisive Brexit battles of the last five years and for the divisive leadership of the Labour Party by Jeremy Corbyn after 2015, but the narrative clearly stops before getting to either. Turner’s book is packed full of reminders of this eventful and turbulent period. Who now remembers Pastygate? Cleggmania? Russell Brand’s dialogue with Ed Miliband or Robert Kilroy Silk’s thwarted battle to take over UKIP? Viewed from the perspective of the current Coronavirus pandemic which, writing in July 2021, has thus far totally dominated the third decade of the 21st century, Turner’s social history of this busy and already seemingly historically quite distant fourteen year period already seems very welcome.

It is not all about politics, of course. As before, Turner takes a good look too at changes in society as viewed through the prism of TV, literature and other developments. No doubt he will one day have much to say about the recent Euro 2020 Finals and subsequent race row. Here, for example, we get a thorough comparison between the different styles of comedians, Jimmy Carr and Roy Chubby Brown. Both are edgy and deliberately tackle sensitive subjects for their humour. Carr, is however, middle-class and Cambridge-educated while Brown never conceals his working-class origins. Carr is frequently on TV, while Brown, although popular, is never allowed on. But, as Turner points out, it is not simply a matter of class. Carr is deliberately careful, firstly never to go too far or to appear as if he is endorsing any (or most) of the dark things he talks about. Brown is much less cautious. He frequently pushes his jokes into genuinely uneasy territory and occasionally seems to be making crowd-pleasing anti-immigration points which totally lack any comedic punchline. Whereas Carr clearly has a carefully constructed stage persona, it is unclear where the stage Chubby Brown begins and the real Chubby Brown ends.

Class comes up a fair bit in the book. Turner identifies a definite resurgence in the popularity of posher folk in public life during this period. Some are obvious: TV chefs such as Nigella Lawson, Hugh Fearnley Whittingstall, Chris Martin of Coldplay, the rise of Boris Johnson and David Cameron, the last becoming the first Tory leader to come from a public school background in forty years in 2005. Others are less obvious: musician Lily Allen was privately educated as were Gemma Collins and some of her other The Only Way is Essex companions. Even Labour’s Andy Burnham went to Cambridge.

The underrated Russell T. Davies 2003 TV drama, Second Coming in which Christopher Eccleston’s video shop assistant surprisingly claims to be the Son of God and indeed turns out to really be him. The phone hacking scandal. The London 2012 Olympics Opening Ceremony. The rise and fall of George Galloway. The 2011 London riots. The Jimmy Saville affair and other scandals. The TV show, Life on Mars. All these topics are revisited by Turner in intelligent and readable fashion.

Other interesting nuggets of information also come in the footnotes. “By 2009 over 9 per cent of Peterborough had come to the city from overseas.” Alexander Armstrong was the first man to play David Cameron in a TV drama in 2007’s The Trial of Tony Blair (aired during Blair’s final months in office). We also get reminders of some of the better jokes of the period in this manner. Frank Skinner’s “George Osborne has two types of friends: the haves and the have yachts.” Or the late Linda Smith’s take on the 2005 Tory election slogan: “Are you sinking like we’re sinking?”

We are also kept informed of the main biscuit preferences of our political leaders, an issue Gordon Brown, a brilliant man, but always uneasy with popular culture, characteristically messed up answering.

There is less about music, although Turner does at one point suggest that the Spice Girls “might have been the last group that really mattered, that meant something beyond record sales and outside their own constituency.”

Turner does well to retain a position of political neutrality here and is especially good at retracing the early machinations on the Labour Left and the Eurosceptic Right which seemed irrelevant at the start of this era but which by the end of it came to seem very important indeed. It is, indeed, a very depressing period for anyone on the liberal left. In 2001, the Lib Dems under their dynamic young leader, Charles Kennedy seemed poised to become the nation’s second party. By 2015, Kennedy was dead and the party wasn’t even registering in third place in terms of either seats or share of the vote. In 2001, Tony Blair won a second huge landslide majority, seemed to have the world at his feet and was one of the most highly regarded political leaders of recent times. Furthermore, no one serious in political life was even remotely contemplating withdrawing from the European Union.

What changed? Read this endlessly fascinating book to find out.

Book review: All In It Together, England in the Early 21st Century, by Alwyn Turner. Published by: Profile Books. Available: now.

I am writing this in a time of acute political crisis. It is easy to lose all sense of perspective when assessing a situation while it’s still happening. Even so, the year 2019 is unlikely to be viewed as a happy one for nation when we remember it in forty years time.

Despite this, the fifth volume in Dominic Sandbrook’s history of Britain since Suez, reminds us, the period, 1979-82 was very eventful indeed.

By 1980, she was already hugely unpopular as unemployment and inflation rocketed. There would probably have been a recession around this time anyway, but Thatcher’s dogged commitment to monetarism made things worse. Not for the last time, Labour blow the opportunity to replace the Tories in power by electing the decent but unelectable Michael Foot as leader.

1981: The SDP breakaway from Labour and are soon way ahead of both the Tories (blamed for unemployment, rioting and recession) and Labour (harmed by Foot’s unpopularity and the antics of Tony Benn).

1982: The Falklands War transforms the political landslide. Thatcher becomes hugely popular again. There were signs of a Tory recovery before the Argentine invasion and it is doubtful ,Labour would ever have won the 1983 election anyway. But the Falklands Factor removed all doubt.

Sandbrook’s brilliant at these sort of books giving both a thorough insight into the politics of the period but almost all aspects of British life.

There are plenty of useful nuggets of info here. The book opens with an account of the live broadcast of the SAS break-up of the April 1980 Iranian embassy siege. The Alan Ahlberg book Peepo! is discussed as is Raymond Briggs’ incredibly harrowing graphic novel, When The Wind Blows. The rise of Ian Botham and Steve Davis are examined as is the fall of Joy Division and the rise of the New Romantics.

I was born in 1976 and so for the first time, like Sandbrook himself (who is about two years older than me) find myself encountering things here which I just about remember. I enjoyed the references to Peepo! (a book my baby brother liked) and was particularly interested in the portrait of my home town of Peterborough. I would dispute the claim made by an employee of the bishop of the time (and apparently endorsed by Sandbrook) that “Race relations are not a problem in Peterborough.” There were no riots in Peterborough as there were in Brixton in 1981 and although I went to school with a large number of children of Pakistani, Indian and Italian, I am white myself and cannot speak for them. But I know this for a fact: there were definitely racial tensions. There still are.

Reading the book, I was surprised to learn just how racist many people were back then. The extent of racism in the police force seems to have been appalling.

Sandbrook has started writing for the Daily Mail in recent years and though he strives for balance, his conservative tendencies occasionally show. Polly Toynbee of The Guardian, then an early SDP champion, is at one point described as a “future saint.” Who regards her as a saint, you might ask? No one in the real world, that’s who. Certainly not Guardian readers. The term is only ever used in reference to Toynbee sarcastically by envious columnists on the Right. I was also surprised to see Sandbrook resurrecting the discredited claim that Michael Foot was in the pay of the KGB. Foot retained strong pro-democratic tendencies throughout his life and won a libel case against the Murdoch press when tbey made the same claim. Were he not dead, I’m sure Foot would be suing again. And I’m sure he would win.

So Thatcher generally comes out of this well, Sandbrook agreeing with Charles Moore, in the face of virtually all evidence that the Iron Lady had a sense of humour. Little credence is given to the notion that anyone might have found the somewhat jingoistic aftermath of the Falklands conflict distasteful. Tony Benn comes out of this badly. After an effective chapter about the fear of nuclear war experienced by many at this time, Sandbrook then seems to go out of his way to argue unconvincingly that nobody was ever seriously worried about it after all.

But ultimately, this is another literally superb addition to Sandbrook’s account of Britain since 1956. What next? Greed is Good? No Turning Back? Nice Little Earner? I eagerly await Sandbrook’s next volume.

As a chronicler of post-war Britain, Sandbrook is only seriously rivalled by David Kynaston and Alwyn W. Turner. 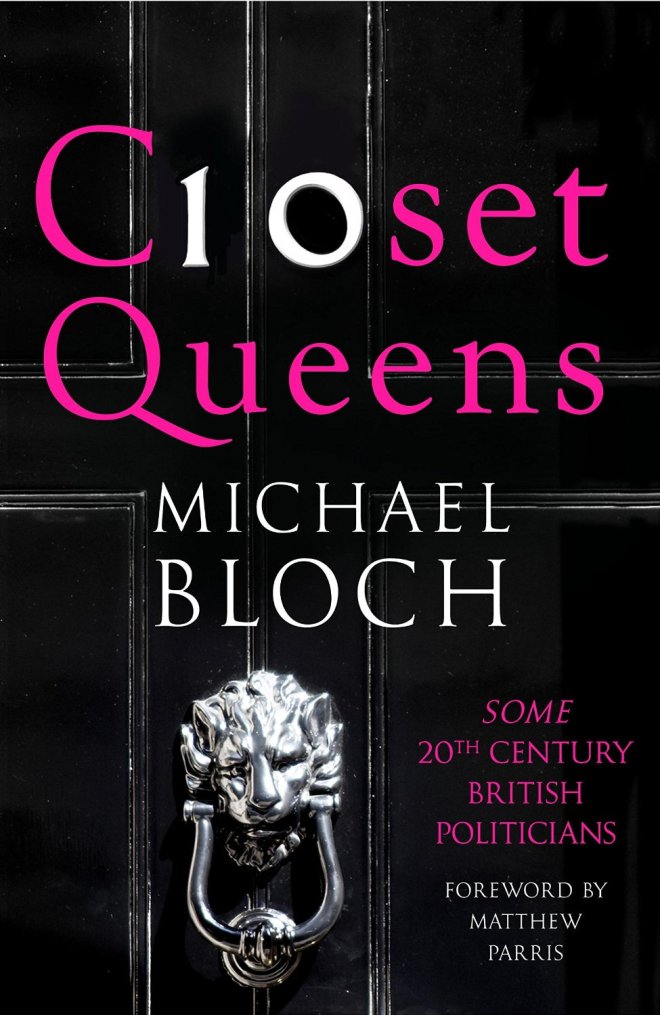 As of May 2015, there are more openly gay members of parliament than there have ever been before. But how many are still “in the closet”? And what about those who kept their sexuality under wraps in the past, perhaps before the homosexual act itself was legalised in 1967?

Michael Bloch’s book is extremely gossipy but also highly informative revealing that far more of the British politicians who shaped the last century were gay than was commonly thought. In some cases, it was just a phase: Roy Jenkins and Tony Crosland’s very intense early relationship fizzled out into mere friendship by the time both had began their careers as Labour politicians. They later became fierce rivals. The still homosexual Crosland was bitterly disappointed when the now keenly heterosexual Jenkins was appointed Chancellor in 1967. Jenkins felt the same when Crosland became Foreign Secretary seven years later. Jenkins left the Callaghan…