A politician will be asked many questions during the course of their life. “Are you going to resign, Minister?” and “Did you threaten to overrule him?” are two less friendly examples. But for anyone hoping to launch their own political career, this book asks all the critical questions anyone aspiring to political office will need to answer if they are going to overcome what should be the first major obstacle to achieving power: winning an election. Never mind, “What do I believe in?” or “why do I want to do this?” These are questions you will have to answer for yourself. Mark Pack and Edward Maxfield are seasoned veterans of a number of successful and unsuccessful campaigns. There is no agenda here, other than to educate the reader as to how best to win whatever campaign they are fighting, be it for election to parliament, parish council or to the PTA. It is full of practical advice. Now on it’s third edition, it is first and foremost an essential guidebook on how to get elected. It is not primarily intended as a source of interest for geeky political bystanders like myself. Although it does fulfil that role too, it must be said.

Let us give a few examples from the text. Have you given any thought to whose votes your trying to win? If your answer to this is “everyone’s” then think again. You need to be more targeted than that. The bad news is, you’re not going to win everyone’s votes. The good news is, you don’t have to.

Are you campaigning for continuity or change? Are you trying to win new supporters or consolidate your position with existing ones? And how do you come across to the electorate? Are you, as Steve van Riel has suggested, Darth Vader (ruthless, but effective) or Father Dougal from Father Ted (caring, consensual but ineffective)?

The book tackles everything from broad strokes to the nitty gritty. How do you recruit a loyal campaign team? How should you deal with internet trolls? How do you deal with the media and get your voice heard? How do you drum home a consistent message without sounding robotic or repetitive? How do you attack your opponents without insulting and alienating potential future supporters?

It’s all here in what remains the definitive election campaign handbook of our times. 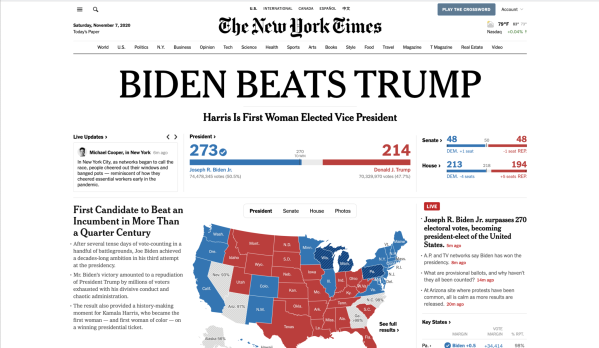 The last two weeks have been a blissful period for America-watchers throughout the world. The new US President, Joe Biden has – believe it or not – spent the past fortnight busily getting on with things, tackling unglamorous but important issues like combatting the spread of COVID-19. Just like real grown-up politicians are supposed to do. There have been no absurdly narcissistic self-aggrandising public statements, no ludicrous proposals, no bullying of reporters or anyone else. When tweets have been sent out they have been of an official nature and presumably not actually written by the president himself, rather than spewed out by an overtired and inarticulate chief executive as he sits in front of Fox News. This is very welcome. It is easy to forget this is how things are supposed to be.

Most of us are very happy to forget about the last four years for a few days but in fairness, there are lessons to be learnt from the recent US presidential election and here ‘international businessman’ (millionaire tax exile), Lord Ashcroft uses polling evidence to see what they might be. Lord Ashcroft has been a major Tory donor and a leading figure in the Conservative Party and his prejudices do occasionally show through in this short book. He makes much of the fact that the high turnout in the November 2020 election ensured that even though he came a clear second, Donald Trump scored more votes than every other candidate except Biden in US history. He makes less of how generally unpopular Trump was throughout his entire presidency. He was never a popular leader at an one single point. He also performed poorly whenever he was presented with any even half-way decent alternative. Even the much maligned Hillary Clinton led him throughout the 2016 contest even besting him by three million votes in the final popular vote, while Joe Biden, perhaps not always the most inspiring candidate in the world, beat him hands down in 2020.

It is difficult to square Ashcroft’s assertion that Trump’s “positive view of American life and opportunities” was a key aspect of his appeal when Trump was so relentlessly negative about so many pillars of US society (the media, the military, the electoral system) himself. It’s also difficult not to believe many Trump supporters were not fundamentally deluded as evidenced by the fact so many, for example, seem to believe Europe is predominantly under socialist governments or the fact that so many of them seem to have been unable to accept Trump’s defeat after what should have been a fairly straightforward and uncontroversial result.

Ultimately, however, there is much of interest to be found in Lord Ashcroft’s poll findings. Whether it was his intention or not, they may prove helpful towards helping nothing like the Trump presidency ever happens again.