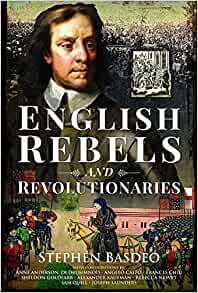 For as long as England has existed, there have always been a brave and stubborn minority who have been prepared to stand up and challenge the existing order in the hope of changing people’s lives for the better. That, in essence, is what this collection of essays is all about. Where would we be now if the barons had not risen against King John, leading to Magna Carta? Or without Wat Tyler and the peasants who revolted against the tyranny of Richard II in the 14th century? Or without the Civil War which briefly unseated the English monarchy and beheaded King Charles I in 1649? In truth, some of these English rebels and revolutionaries were more effective than others. Wat Tyler’s rebellion, for example, appeared to achieve very little at all at the time, but it did at least show that the common people could stand up and rise up against the King. Indeed, it is no coincidence that Richard II was overthrown forever not long afterwards. But, we should always remember, history is not about things staying the same. It is all about change. And every one of the rebels and revolutionaries described in this book, played some part in transforming England from a medieval feudal tyranny into the democratic constitutional monarchy of today.