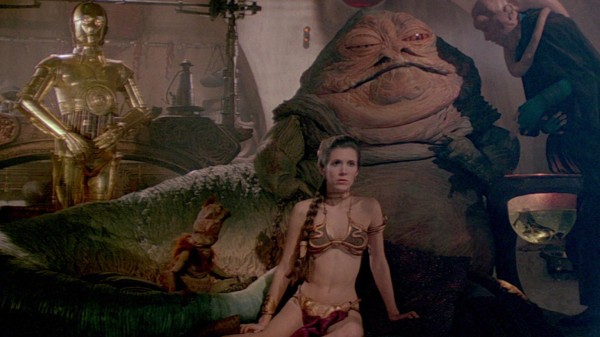 When I was six, my older brother took me to see Return of the Jedi.

I grew up in Peterborough, a new town in the East Midlands. As with many British towns then, there were two cinemas in the city centre in this case, the Odeon and the Canon (otherwise known as the ABC and the 123, although I’m not sure which way round it went). Even though I was pretty small, we were easily able to walk in. Later, an out of town multiplex opened and drove both of these out of business. Today, there are no cinemas in the city at all which seems appalling for a city of its size (now about 200,000 people, according to Google). I no longer live there, perhaps partly for this reason.

I loved the film. Like most people I would now agree its the weakest of the three original films but it has more memorable set pieces than, say the Empire Strikes Back and better special effects. I enjoyed the bit with Jabba the Hut, the chase through the woods and, of course, the Ewok stuff towards the end. I remember Yoda dying.

As befits a film saga which started with Episode IV, I’m pretty sure I’d never watched the first two films properly at that point, so presumably didn’t understand a lot that was going on. The first film came out when I was a baby and the second one when I was just three. I didn’t watch them properly until the 1990s. My brother was 17 then and I get the impression he’d already seen all three films more than once.

That December, I was lucky enough to get the Millennium Falcon, Jabba, Admiral Ackbar and other related toys for my Christmas and birthday presents, in addition to the CP3PO and Luke and Leia toys which I’d apparently inherited, presumably from my brother. I also remember owning a Return of the Jedi comic. Not everyone shared my enthusiasm for the franchise at this point, however. I think many people had lost enthusiasm through overexposure. This included George Lucas himself who said he would not make any more films. This contradicted earlier suggestions that he might make three prequels.

Welshman Richard Marquand directed Return of the Jedi incidentally. The importance of the Welsh sci-fi scene is often overlooked.

Otherwise, it must be said, that’s a pretty unimpressive top ten. I don’t think I’ve seen 7, 8 and 9 (I may or may not have seen Sudden Impact). I doubt Mr Mom was even shown at cinemas in the UK. Otherwise, Octopussy (which was actually partly filmed near Peterborough) is the worst James Bond film ever. Trading Places and WarGames are great ideas, poorly executed. Terms of Endearment was okay, I suppose, but surprisingly poor for a Best Oscar winner. I’m surprised Superman 3 didn’t make this list. Not that that was great either.

It should be mentioned the mid-1980s represents the absolute nadir of post-war cinema attendance. Only the pandemic years of 2020 and 2021 have been worse so far. Having peaked in the late 1940s, numbers declined steadily in the 1950s as TV and car ownership rose and went into absolute freefall in the 1960s, 1970s and early 1980s. Numbers recovered after 1985, helped no doubt, by the opening of the multiplexes I was moaning about earlier. I’m not sure how typical I was, as I was only a child but until about 1989, I often only went to the cinema once or twice myself.

Part of the problem, of course, was video. My family got their own first video player in 1983. The first films we rented were both time travel-related: Time Bandits and the 1960 Time Machine. I’m not sure what prompted my Dad (who generally dislikes sci-fi) to rent either. But I still love both films.

I also loved Return of the Jedi. Thirty years later, I would get to write the Star Wars Clone Wars annual. I’m glad I got to see one of the original Star Wars films on the big screen. This wouldn’t happen again until I was in my twenties. 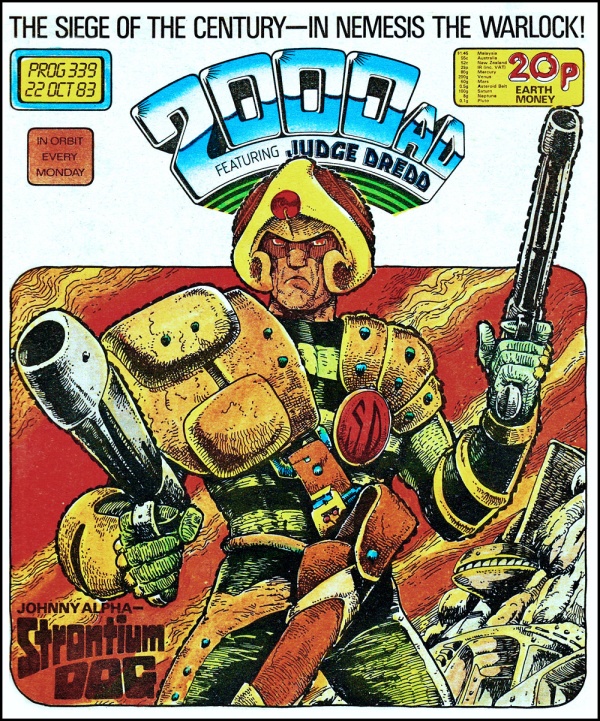 March (Prog 307): The final Harry Twenty on the High Rock.

May (Prog 317): D.R. and Quinch Have Fun On Earth in a Time Twisters story. It is their first ever appearance (Alan Moore/Davis).

September (Prog 334): For the first time in 2000AD history, all four stories reach the conclusion of their particular stories simultaneously (Dredd, Slaine, Rogue Trooper, Robo-Hunter). This happens again at the end of the year.

June: Star Wars Episode VI: Return of the Jedi is the biggest film of the year. It is the last official Star Wars film for 16 years. Episode VII will not come out for another 32 years.

Chris Hallam is a freelance writer. Originally from Peterborough, he now lives in Exeter with his wife. He writes for a number of magazines and websites including The Companion, Yours Retro, Best of British and Comic Scene – in which he wrote about Judge Death, The Ballad of Halo Jones, Dan Dare, The Eagle, Metalzoic and Alan Moore’s Watchmen. In the past, he wrote for Metro.co.uk, Radio Times, DVD Monthly and Geeky Monkey. He co-wrote the book, Secret Exeter (with Tim Isaac) and wrote A-Z of Exeter – People, Places, History. He also provided all the written content for the 2014 annuals for The Smurfs, Furbys and Star Wars Clone Wars as well as for sections of the 2014 South Park annual and all the 2015 Transformers annual.