One consequence of the sad death of filmmaker Alan Parker last July, is that at least now the status of Sir Ridley Scott, as the grand old man of British cinema is now pretty much unchallenged. For, make no mistake, while there are undeniably many other great British directors around –  Sam Mendes, Christopher Nolan,  Edgar Wright, Ken Loach, Mike Leigh, Mike Figgis and Danny Boyle amongst them – no one else has been producing quality films since the 1970s in quite the way Scott has.

There are similarities between Parker and Scott. Both came to filmmaking as a result of careers in advertising. Scott was successful enough to be a millionaire by the time he was thirty and received acclaim for his famous nostalgic ‘boy on a bike’ Hovis TV commercial. Both made there directorial debuts at almost the same time: Parker with the unique and ambitious ‘kids’ only’ gangster musical, Bugsy Malone in 1976, Scott with the period drama, The Duellists in 1977 starring Keith Carradine and Harvey Keitel.

There are plenty of differences too, however. Scott’s life and career was blighted by the deaths of his two brothers, Frank who died after suffering from skin cancer and Tony (himself a very successful director, of Top Gun amongst many others) who committed suicide following a cancer diagnosis in 2012.

Parker and Scott also directed very different kinds of films. Ridley Scott has never directed a musical or a film with a very young cast as Parker often did. Parker, in turn never did a science fiction film or an historical epic. Although some of Parker’s films (such as Mississippi Burning or Evita) are set in the past, none are set outside the 20th century as more than half of Scott’s are.

Finally, after Bugsy Malone, Parker enjoyed a twenty year heyday with numerous commercial and critical successes in the 70s, 80s and 90s including Midnight Express, Fame and The Commitments but directed nothing good after that. Scott, in contrast, really only made two big successes in the 20th century: Alien and Thelma and Louise. All of his other 1980s and 1990s films were essentially flops. But despite being five years older than Parker and into his early sixties by  the year 2000, the 21st century has given Ridley Scott a new lease of life. The last twenty years have seen him produce many of his biggest successes including the Oscar-winning triumph, Gladiator, Hannibal, Black Hawk Down and The Martian.

As this sumptuous and beautifully illustrated coffee-table book from film expert, Ian Nathan reminds us, he has directed at least three of the best science fiction films of all time, as well as many other great ones. The sheer power and horror of Alien (1979) has never been equalled. Both this and Blade Runner (1982) have elevated the science fiction quality level forever, the second of these not really sufficiently appreciated until the 1990s. Some of his ‘minor ‘films such as White Squall (1996) and Matchstick Men (2003) are undeniably worth revisiting and even where the results have occasionally fallen short of expectations (see, perhaps, 1492: Conquest of Paradise or A Good Year), Scott certainly be faulted for a body of work which is always interesting, ambitious and which has occasionally resulted in some of the greatest films ever made.

To quote the title of one of his less successful films: he remains a Legend.

Once stories had a beginning, a middle and an end. Not anymore! Today, the trend is for the middle and the end to come first, then the beginning to come along later. For this is the age of the prequel.  Stay tuned for Part One of this feature next week…!

Strictly speaking, this isn’t a “prequel” to the Lord of the Rings saga in the sense that we’re using the term here. The book of The Hobbit was published well before the later trilogy (1954-55). But the films (the second Hobbit film is due out in December) are a different matter appearing a full decade after the Rings saga came to the screen (2001-2003). Got that?

Does it work?: Gandalf is greyer, Gollum a shade less green and Bilbo is Tim from The Office (Martin Freeman) rather than the one from Alien (Ian Holm). But so far, most complaints have been about the Hobbit saga being needlessly padded out into three films rather than about any inconsistencies n the chronology.

This attempt to explain the origins of Darth Vader was less well received than the original trilogy (1977-1983), many fans finding it more boorish, cartoonish and perhaps even racist than the original three. The last film Revenge of the Sith (2005) does wrap things up neatly though, ending around twenty years before 1977’s A New Hope. This trilogy also probably did spark off the modern fad for prequels too.

This acclaimed recent TV series focuses on the life of Thomas Harris’s serial killer Hannibal “the Cannibal” Lecter (Mads Mikkelsen), before the events of the very first book, Red Dragon (1981).

This film does cheat a bit imagining Watson and Holmes meeting at school: in fact, they clearly first meet as adults in the first Sherlock Holmes story A Study In Scarlet. But it is a fun film and features the first ever computer animated film character (a stained glass knight who is hallucinated at the start). The movie was a flop though.

The adventures of the future 007 have been depicted in five books by Fast Show star Charlie Higson set in the 1930s when Bond was still at Eton. The books are: Silverfin, Blood Fever, Double Or Die, Hurricane Gold and By Royal Command.

This was actually the sixth of CS Lewis’s Narnia novels but is actually set much earlier than the others. It opens in late Victorian England and explains the birth of Narnia. Some Narnia series today rank it as the first book in the saga, order-wise.

The Star Trek franchise was briefly killed off by the unexciting Scott Bakula series which chronicled the early days of the Enterprise in the 22nd century. The JJ Abrams series of films which detail the early lives of the characters from the original series (including a previously unmentioned liaison between Uhuru and Spock) have thus far proven far more popular.

Despite, rather oddly, being set in the present day, this TV show starring Tom Welling as the young Superman proved remarkably popular and enduring.

Before Lewis, there was Morse. And before even that, this recent 1960s set ITV series sees Shaun Evans playing Endeavour Morse at the start of his police career. 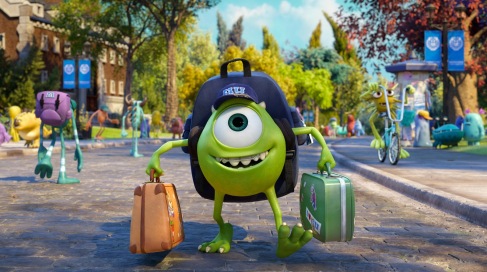 Monsters Inc ended rather neatly. So this prequel flashes back to Mike and Sully’s (child-friendly) college days.

The Muppets in cartoon-form in one nursery supervised by a giant nanny. Basically rubbish.

Taking its inspiration from the short sequence starring River Phoenix as a teenaged Indy at the start of Indiana Jones and the Last Crusade, this star studded  TV show saw the young adventurer played by several different actors (notably Sean Patrick Flanery) enjoying high jinks across a range of early 20th century locations. A pre-Star Wars example of Lucasfilm prequeling.

The first X-Men prequel (exploring Wolverine’s past) wasn’t great. The second one set in the Sixties (and featuring a cameo from Hugh Jackman’s Wolverine) was better. Despite James McAvoy’s Professor Xavier (the young version of Patrick Stewart’s character in the original X-Men trilogy (2000-2005) occasionally spouting lines like: “I suppose I am a real professor, aren’t I? Next thing you know, I’ll be going bald!” Ooh! The dramatic irony!

Very clearly a prequel to the Alien films despite various official attempts to deny it. Still not very good though.

A sequel and a prequel, unusually. On the one hand, we see Michael Corleone (Al Pacino) continue to build his crime empire in the 1950s following on from the first film. On the other, we flash back to the start of the century and see his father Vito (Robert De Niro when he’s an adult) coming to America and slowly getting the family business started. Unlike the Michael stuff, these early bits are in fact derived from Mario Puzo’s original novel. The film ends just after Pearl Harbor (1941). The first film starts just after the war’s end (1945).

An excellent prequel set in the near future which explains how the apes of Planet of the Apes (1968) managed to usurp humans as the dominant race on Earth.

Prequel to the long running comedy set just before the Second World War. Peter Sallis (Cleggy) plays his own character’s father and Seymour appears even though none of the characters met him until a mid-80s episode of the original series. Not as bad as it sounds, as the young actors are well cast (including an extra one called Sherbet who we can only presume was killed in the war). It does rather miss the point though as “young men acting like children” isn’t quite the same as “old men acting like children”.