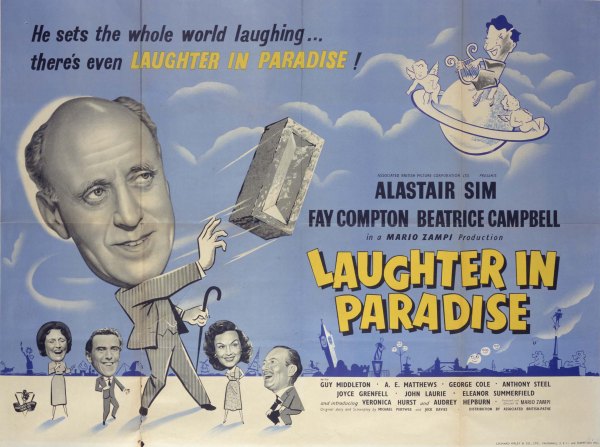 After a long life of pranks and practical jokes, the wealthy Henry Russell (Hugh Griffith) is dead, leaving aside a substantial sum of money to four of his relatives. But old Henry being Henry, things are not going to be quite as simple as that. For each of his relatives are all flawed in various different ways and under the terms of the old rascal’s will, each will have to complete a very specific task before they can get at his money. Each challenge has been perfectly designed to force them to confront their own worst failings.

Agnes (Fay Compton), for example, a dreadful snob is forced to spend a full month in the employ of a middle-class family headed, in this case, by a hypochondriac Scot (played by John Laurie, later of Dad’s Army). For the supremely timid young bank clerk, Herbert (George Cole), however, the task is different. He must stage a hold up at the very bank he works for using a water pistol. Simon (Guy Middleton), meanwhile, is a first-class cad and a womaniser in the mould of the type of characters Terry-Thomas often used to play in films like this. He is obliged to marry the first single woman he speaks to, to get his share of the loot. He actually cheats straight away ignoring the first single woman he meets, a beautiful but presumably penniless young cigarette seller. This very small part is played by Audrey Hepburn in her screen debut. 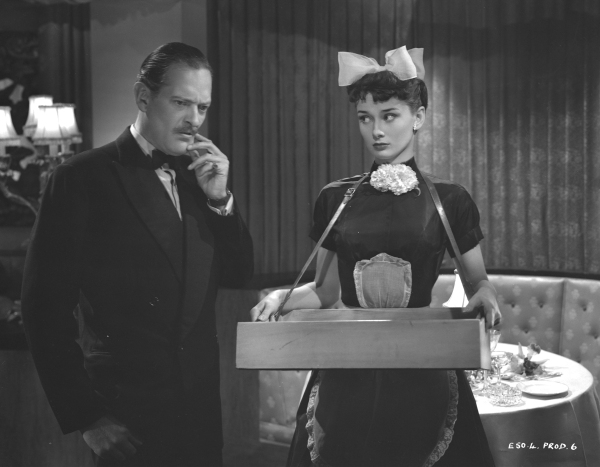 Finally, there is Deniston (Alastair Sim), a retired army officer, whose life is already pretty complicated even before Henry’s demise. Publicly engaged to an overenthusiastic armed services girl, ‘Fluffy’ (Joyce Grenfell, great as ever), Deniston leads a double life enjoying a secret career dictating the trashy American-style crime novels he has composed to his adoring secretary (Eleanor Summerfield) which are then published under a variety of pseudonyms. Deniston’s task is to commit one actual genuine crime which will seem him incarcerated for precisely 28 days. Sim’s character finds the execution of this, surprisingly difficult.

There are a few extras. Although he obviously hasn’t watched the film that recently, Stephen Fry’s knowledge and genuine love for the film is obvious during his interview. We also get to see Sim hamming it up as the Roman Emperor Nero opposite his frequent co-star George Cole in a wartime short. More dedicated Sim fans might want to listen to his 1949 speech delivered on being elected Rector of Edinburgh University (beating future Prime Minister Harold Macmillan) in full. 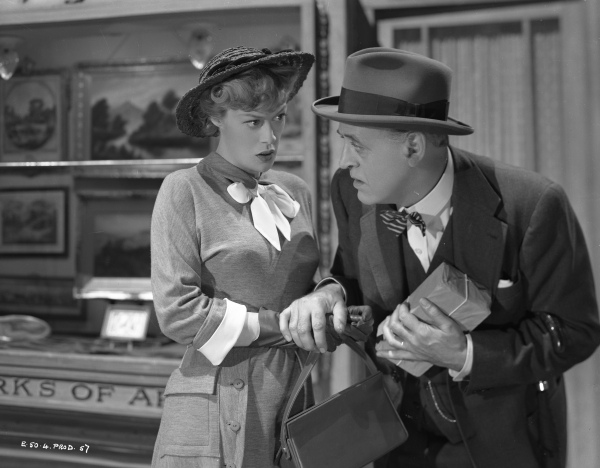 Newly restored nearly seventy-years after it first appeared, Laughter In Paradise is still lots of fun. Alastair Sim, in particular gets some marvellous screen moments, self-consciously turning a bust of Shakespeare the other way at one point so as if to prevent the Bard seeing him delivering the particularly purple prose of his latest potboiler (e.g. “she was one hot tomato”). Other brilliant sequences see him make several abortive attempts to throw a brick – for some reason, neatly tied up in string – through a jeweller’s shop window and and a long, drawn out attempt to get caught shoplifting an umbrella in a Piccadilly department store. “The wrong tartan,” he explains, on returning it, embarrassed. 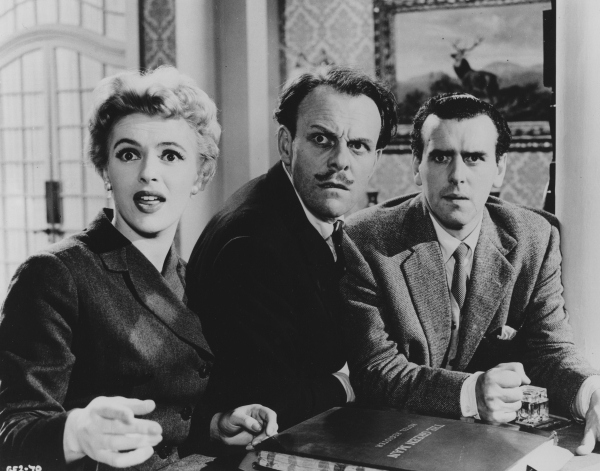 The 1950s was undoubtedly a classic period in the career of character actor, Alastair Sim. This film sees him playing Hawkins, a watchmaker who also operates as an assassin. Early scenes demonstrate how Hawkins has often adopted a variety of ingenious disguises before successfully blowing up his victims. His main target here is an adulterous politician Sir Gregory Upshott (Raymond Huntley) who he tracks to a hotel, The Green Man of the title.

Although hardly groundbreaking, The Green Man is pleasantly enjoyable fare, packed with familiar faces recognisable to anyone…

The 1950s was undoubtedly a classic period in the career of character actor, Alastair Sim. This film sees him playing Hawkins, a watchmaker who also operates as an assassin. Early scenes demonstrate how Hawkins has often adopted a variety of ingenious disguises before successfully blowing up his victims. His main target here is an adulterous politician Sir Gregory Upshott (Raymond Huntley) who he tracks to a hotel, The Green Man of the title.

Although hardly groundbreaking, The Green Man is pleasantly enjoyable fare, packed with familiar faces recognisable to anyone who enjoys post-war British cinema. Can you spot Michael Ripper, Dora Bryan and Arthur Lowe?

And unlike Sim’s hapless assassin, this is a comedy which rarely misses its target.

There are few authors who I can claim to have read every single book they have had published. Tom Sharpe, who has just died, aged eighty five, was one such author. Every one of his sixteen books is both funny and incredibly readable.

That is not to say they are low brow either. Although sex, contraceptives, misunderstandings and even famously, a sex doll, famously play a part, Sharpe’s novels are extremely well written and a world away from the low comedy of the Carry On films which were still being published when his novels first began appearing.

His heyday in fact occurred at that time of great low national self esteem, the mid-Seventies. Porterhouse Blue (1975) in which a reforming Tony Benn-style minister is transferred to the position of Master of an ancient and very traditionalist Cambridge college, is for me, his masterpiece. The efforts of the new Master (driven by his domineering wife) to change the rules to enable women to be admitted as undergraduates lead to a fierce Trollopian conservative campaign of resistance from the college notably Skullion, a porter.  The academic shenanigans predate Terry Pratchett’s imaginings about Unseen University and are worthy of comparison with the campus novels of Malcolm Bradbury and David Lodge from the same period. Blott on the Landscape (1975) was similarly excellent while Wilt (1976) drew on Sharpe’s experiences as a college lecturer in an East Anglian polytechnic. Bored of his life teaching English Literature to apprentices and butchers, Sharpe’s hero Henry Wilt soon finds himself wrongly accused of murder after his wife goes missing when Wilt is tricked into being tied to a sex doll at a party. These last misfortunes thankfully never happened to Sharpe.

All three of these books were adapted for the screen in the late Eighties. Porterhouse Blue (starring Ian Richardson as Sir Godber Evans, David Jason as Skullion and John Sessions as the hapless student Zipser) and Blott on the Landscape starring David Suchet and George Cole both worked well on TV, adapted by Malcolm Bradbury. Wilt (1989) a film starring Griff Rhys Jones and Mel  Smith was entertaining in its own way but as a version of the novel, it was poor. Wilt would appear in four more Sharpe novels.

After a hugely successful thirteen years, Shape published nothing after the third Wilt novel Wilt On High (1984) until he produced a sequel to porterhouse Blue Grantchester Grind (1995). Although not a particularly memorable sequel, Sharpe’s later books are still enjoyable, although by this time increasingly less in keeping with the times – characters still, for example, use telephone boxes a surprising amount despite the advent of mobile phones.

But to say Shape’s books are of their time is a weak criticism. The same is true of the works of Dickens, Wodehouse and Waugh, indeed of every book ever written.

The Throwback, The Great Pursuit , Wilt. One hopes such books will endure and continue to be read. It is a shame Sharpe never wrote an autobiography. The details of his past would surely have made for a great book in itself. Sharpe’s mockery of the South African Apartheid regime, a theme of his first two British novels Riotous Assembly (1971) and Indecent Exposure (1973) saw him expelled in 1961, something he remained angry about for the rest of his life. As a child, his family also risked internment. His father who died in 1944 was a fascist sympathiser and a friend of William Joyce (Lord Haw Haw).

As it is, sixteen very funny books is a fine legacy from one of the greatest British comic writers of the 20th century.