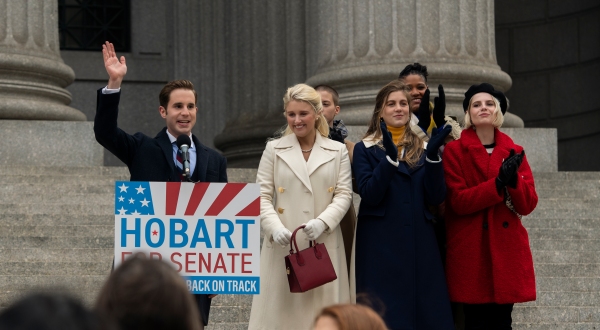 Payton Hobart is back.

Having licked his wounds after the bruising San Sebastian High School presidential battle, the ruthlessly ambitious Hobart (Ben Platt) now sets his sights on one of New York’s State senate seats for what will be his first real grownup political campaign. Incumbent State senator Dede Standish (Judith Light) initially seems secure, but her re-election campaign is soon threatened by rumours of the middle-aged veteran politician’s “throuple” polyamorous relationship with both her husband and boyfriend.

Hobart, now supported by most of his allies and a few rivals from his earlier campaign, soon appears to be making headway, despite the potential risk of exposure over his own three-way relationship with his girlfriend, Alice (Julia Schlaepfer) and his former rival, Astrid Sloan (Lucy Boynton). Ruthlessly exploiting the environment issue in a bid to establish a foothold among younger voters, Hobart soon becomes engaged in a protracted dirty tricks campaign waged against and also by, his more experienced political opponent, Standish.

More sustained than the first season which began promising much, but imploded fairly quickly, The Politician – Season 2 is enlivened by an enjoyable turn by Bette Midler as Standish’s passionate campaign manager, Hadassah Gold. Infinity Jackson (Zoey Deutch), one of the most memorable characters in the first season is back too (although doesn’t do a lot), while Gwyneth Paltrow returns as Hobart’s mother, herself engaged in a somewhat far-fetched campaign to become Governor of California driven by a plan to lead the state out of the USA entirely.

While Season 1 was almost wrecked completely by the terrible sixth episode The Voter, the sixth episode here (The Voters) deploys similar tactics to look at a mother and daughter’s separate experiences of Election Day. Thankfully, this time, it works. While as its Season 1 equivalent was derailed by its determination to show the unusual vices of its drug, sex and violence-obsessed subject, this time the tensions between the two more rounded characters provide us with a more valuable insight into the generational battles surrounding the campaign.

Ben Platt is good as before as the charismatic, scheming Payton Hobart, a sort of younger, better looking Richard Nixon for the 21st century. No less self-serving and paranoid than the disgraced 37th US president, Pitch Perfect’s Platt’s potential president is certainly a better singer than Nixon ever was and slightly better on the piano.

A fine series then, if perhaps not a great one. Not quite a full Obama but better than a Ford, this is a welcome escape from the real life horrors of the Trump era.

And the title sequence is still great.

Payton Hobart really wants to be president. He really, really wants it, in fact. He seems to have planned out every detail of his two terms in the White House already. And he is only seventeen years old. He seems to the living example of why anyone who wants to be president enough to successfully go through the process of being successfully elected is probably precisely the wrong person to be doing the job.

Netflix’s new comedy drama begins with Peyton (Ben Platt) launching his campaign for election to the position of student body president of his Santa Barbara high school. This proves to be a surprisingly big deal fought with almost all of the intensity of the actual presidential elections, Hobart imagines one day fighting himself. Indeed, that’s the plan for the series too: future seasons of The Politician aim to focus on different political campaigns occurring throughout Peyton’s life. The brilliant opening title sequence (which uses the excellent 2005 song, Chicago, by Sufjan Stevens) depicts Peyton the politician being created by a Frankenstein-like process of alchemy, before offering his hand to greet the viewer.

The opening episodes of Ryan Murphy’s series are very twisty and bubble over with exciting story possibilities. Imagine Tracy Flick (Reece Witherspoon) in 1999’s film Election magnified by ten. Peyton is slick and like Kennedy, Bush and Trump before him has been born rich. He seems to inspire a phenomenal amount of loyalty in both his girlfriend Alice (Julia Schlaepfer) and his campaign team (played by Laura Dreyfuss and Theo Germaine). But he also seems erratic and clearly has skeletons in his cupboard. What is his exact relationship with his handsome rival, River (David Corenswet)? Are they gay or bisexual?  In fact, this probably isn’t a problem: everyone seems to be bisexual here. The whole thing is a bit like a 1980s Bret Easton Ellis novel at times.

There are other intriguing elements notably potential running mate, Infinity Jackson (Zoey Deutch: daughter of Back to the Future’s Lea Thompson), an apparently sweet-natured character dominated by her horrendous, gold-digging grandmother (an excellent Jessica Lange). Peyton himself is dominated by his own bohemian Lady MacBeth-like mother (Gwyneth Paltrow, another Oscar winner, like Lange and also great here). River’s girlfriend, Astrid Sloan (Lucy Boynton) also seems like a potentially interesting character, at least at first. The fine actor Bob Balaban also gets a high billing here as Peyton’s step-dad, but is barely in it.

Sadly, like a morally bankrupt politician, the series does not live up to its early promise. Perhaps that’s the problem with planning several seasons in advance like this: the creators seem to have lost interest in this story and started setting up the next series a few episodes before the end. The election story-line fizzles out. The mid-season episode, ‘The Voter’ depicts an apathetic student totally ignoring the election day events occurring around him. This is an interesting idea which might have provided a fresh new perspective on events: not everyone at Peyton’s school (or in society generally) is obsessed with politics, after all. But the voter (played by Russell Posner) is clearly anything but typical. He is far more drug-obsessed, girl-obsessed (a point over emphasised with far too many shots of him checking girls out) and violent than anyone around him. The episode is a complete dud.

Despite these flaws and too many irrelevant musical interludes from the talented Platt, however, The Politician is still well-acted and compelling enough to make it worth viewing. But as Peyton himself is once cruelly described, this is more Gerald Ford than Barack Obama.

The Politician is on Netflix now.