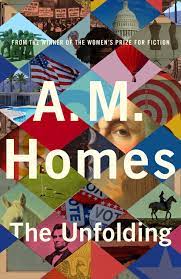 First, a quick word of warning: one of the main characters in this novel is referred to only as “the Big Guy” throughout. This frankly takes quite a bit of getting used to, but somehow it is possible. And it’s well worth doing so, for if you can, at the end of the day, this is another fine novel from one of the best American authors around.
It’s November 2008 and Barack Obama has just soundly beaten Senator John McCain in the race to the White House. The Big Guy (you see? I know!) is very unhappy about this. He is a rich, ageing conservative and soon begins consulting some of his friends who have similar inclinations as to the best possible response to these events. But what exactly do they intend to do?
As others have noticed, this is definitely quite a political book. Homes’ last novel, May We Be Forgiven featured a character who was obsessed with Richard Nixon a lot and this one includes cameo appearances from the defeated McCain as well as from presidents Bush (the second one) and Obama. I enjoyed the political side of the book, but rest assured, there’s lots of other good stuff here too as the Big Guy finds time to reassess his relationships with Charlotte, his troubled, alcoholic wife and with their intelligent, thoughtful daughter, Megan.

Meet Jane, a young teacher living in Boyne City, Michigan at the start of the 21st century. In addition to a consistently embarrassing mother, Jane has an on‐off relationship with Duncan, an older man who not only seems surprisingly close to his ex-wife, Aggie, but who seems to know every woman in town. Then there’s Jimmy, Duncan’s nice but childlike co-worker. Spanning a period of nearly twenty years, which naturally sees many changes for both Jane and those around her, Katherine Heiny’s novel is a hugely addictive visit to a charming and enjoyable small-town world.

Tender hearted readers be warned: AM Homes‘s latest book opens with a series of dramatic events unveiled at such a breathless pace that you might feel you cannot keep up.

Henry is the narrator and the brother of George, a successful TV executive who Henry is well aware has a violent streak. Henry thus knows he is taking a risk kissing George’s wife. He takes even more of a risk when he subsequently beds her while George is away, George having killed two people in his car and been sectioned. Unfortunately, George escapes and on finding the two in bed together bashes his wife’s head in with a lamp. Henry escapes unharmed (at least physically). All of this occurs within the first fifteen pages of this 500 page novel.

Mercifully, the pace slows down after that and indeed as with Homes’s earlier This Book Will Save Your Life, relatively little happens throughout the rest of the book. In truth, it is not a harrowing read and is often quite funny. Henry helps his brother’s children come to terms with the tragedy and tries to make sense of things himself. In the meantime, he has some sex, helps his niece escape a predator on her school’s teachings staff and obsesses about the subject of his book and lifelong obsession: the life and career of Richard Nixon.

This is an enjoyable read from one of the United States’ finest contemporary novelists.