Four score and seven years ago (or thereabouts) the Oscars burst onto the world. With this year’s ceremony fast approaching, let’s take a look back at the highs and lows of Academy Award history…

1927: World War I based thriller Wings wins the first ever Best Picture Oscar. It is the last silent film to win until The Artist wins in 2012.

1933: In a scene reminiscent of the early scenes of Zoolander, comedian Will Rogers opens the Best Director envelope and says “Come and get It Frank!” Unfortunately, there were two directors called Frank nominated in that year. Frank Capra was half way to the podium before Rogers clarified that it was Frank Lloyd, director of Cavalcade who had won, not Capra. Happily, Frank Capra wins for Mr Deeds Goes To Town in 1936. In future years, the awards are always announced in a heavily scripted way, to avoid such a cock up happening again.

1941: How Green Is My Valley beats Citizen Kane, subsequently the most critically acclaimed film of all time, for Best Picture.

1968; A tie in the Best Actress category! Barbara Streisand wins for Funny Girl. Katharine Hepburn also wins for The Lion In Winter (her third).

1970: George C. Scott wins Best Actor for Patton. He chooses not to attend and instead watches a ball game on the other channel.

1972: Native American Sacheen Littlefeather picks up Marlon Brando’s Oscar for him to promote Native American issues (it is Brando’s second. This one is for The Godfather). She is actually not a political activist herself but a small time actress and later appears in Playboy.

1973: David Niven remarks of a streaker at the ceremony that “the only laugh that man will ever get is by stripping off and showing his shortcomings”.

1974: Robert De Niro wins his first Oscar playing Vito Corleone in The Godfather Part II. Marlon Brando played the same character in 1972’s The Godfather. It is the only time two actors have won Oscars for playing the same (fictional) person.

1981: Katharine Hepburn wins her fourth and final Oscar for On Golden Pond. No other actor, male or female, has ever won four. Cate Blanchett later wins one for playing Hepburn herself in The Aviator in 2004.

1992: Rumours abound that Jack Palance read out the wrong name during his announcement of the Best Supporting Actress winner Marisa Tomei. In fact, this is impossible: only one name is ever on the card, the name of the winner. Marisa Tomei in fact thoroughly deserved to win for My Cousin Vinny (even though it was a surprise result). That said, Palance did seem to be in a somewhat “tired and emotional” state as he announced the award.

1995: Tom Hanks wins two Best Actor Oscars in consecutive years (a feat not achieved since Spencer Tracey in the 1930s) for Philadelphia and Forrest Gump. Both times he delivers excruciating acceptance speeches inadvertently “outing” a high school teacher in the first (a moment which inspired the Kevin Kline film In and Out) and in the second stating “I feel like I’m standing on magic legs.”

2012: Meryl Streep wins her 17th nomination (and her third win) for The Iron Lady. No actor has ever been nominated as many times as she has. In 2014, she won her 18th nomination for August: Osage County. Her other wins were for Kramer Vs Kramer and Sophie’s Choice.

Trying to guess who will win this year’s Best Picture Oscar? Why not let the past be your guide?

Nearly half of the past fifty Best Picture winners had either a British director, lead actor or actress, a British setting or has other heavy British involvement.

No science fiction film has ever won Best Picture. Gravity, Avatar, Star Wars and A Clockwork Orange were all nominated but didn’t win in this category.

Only two sequels have ever won. The Godfather Part II (the first Godfather film also won) and the third Lord of the Rings film.

Here are my predictions for twelve of the main categories at next month’s US Academy Awards.

Please note: These are not my favourite films (I have not seen most of them) nor are the ones I think most deserve to win necessarily. I am just making an educated guess at what will win.

Please note as well, that my track record on this is poor. Last year only a third of my predictions were correct!

The Wolf of Wall Street

Assuming I got the Best Film right, this is a reasonably safe bet. The Best Picture’s director also wins 90% of the time (although this didn’t happen for Argo director Ben Affleck last year).

Could conceivably also be Bale or McConaughey.

A consolation prize for Hustle? Might go to Bullock otherwise. Cate Blanchett was the favourite until the Woody Allen controversy. I’ve no idea why Naomie Harris didn’t get an Oscar for Long Walk To Freedom. She richly deserved one.

Taking a risk here as the best film usually gets a screenplay Oscar two out of three times. But that isn’t the same as every time is it?

The Moon Song – Her

No idea! Although this is one of the few categories I got right last year.

The Act of Killing*

Cutie and the Boxer 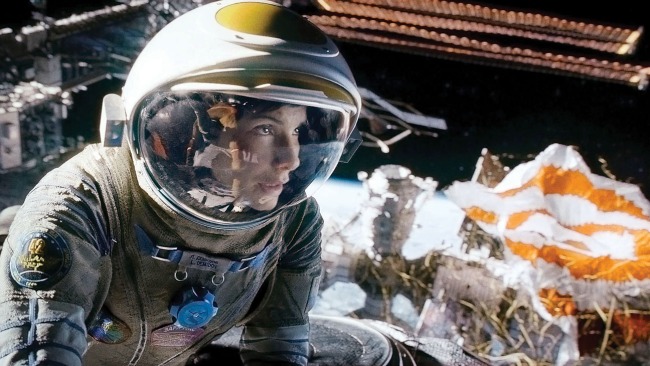 Today sees the announcement of this year’s Oscar nominations. But with all the questions raised by this year’s unusually strong field of contenders (12 Years A Slave, American Hustle, The Wolf of Wall Street and Philomena amongst them), one question remains more tantalising than any other: could  Alfonso Cuarón’s Gravity becomes the first science fiction film to secure the coveted Best Picture Oscar?

It would certainly be a first. For while sci-fi films have been the recipient of countless technical and science fiction awards, the genre despite (or perhaps because of) the big box office it has generated, has generally been viewed with lofty disdain by the Academy of Motion Picture, Arts and Sciences throughout its eighty five year history.

Even the advent of higher quality sci-fi at the end of the Sixties changed little. Stanley Kubrick’s 2001: A Space Odyssey and Planet of the Apes (both 1968) went unrecognised in the Best Picture category. The latter was even based on a novel by Pierre Boulle, the French author who had previously penned the source material for the multi-Oscar winning Bridge on the River Kwai. But it was all to no avail. Kubrick’s Clockwork Orange was nominated in 1971, although its science fiction content was generally overshadowed by controversy over its violence.

Then, in 1977, a new hope. Star Wars was nominated for Best Picture. True, it was beaten for the main prize by Woody Allen’s Annie Hall (a fairly unusual case of a comedy winning. This has only happened three times since). But with sci-fi entering a new period of high quality in the next decade (Ridley Scott’s Alien and Blade Runner and James Cameron’s Aliens and Terminators), did this mean the genre would finally receive its due?

Alas, no. the Eighties was also a period in which the Academy went out of its way to award worthy films (Amadeus,  Out of Africa, Driving Miss Daisy) rather than those that were necessarily entertaining. Sigourney Weaver got a nomination for Aliens. But nothing from the genre has won since.

What has changed? Well, for one thing, 2004 saw the final part of the Lord of the Rings saga, The Return of the King carry off the Best Picture statuette. No, that is not a science fiction film and yes, Daniel Radcliffe is right to complain none of the Harry Potter films were ever nominated in the big categories for anything. But it feels like a start.

Also, we seem to be enjoying another era of high quality sci-fi courtesy of The Huger Games films, Ender’s Game and Elysium.

And finally, Gravity has received a wealth of critical acclaim rarely bestowed on a film of the science fiction genre. Even Alien and Blade Runner never received such praise at the time of their release.

Whether Gravity ends up carrying off the greatest prize at the awards ceremony in March, or not, it has certainly struck a blow for this critically unsung genre. We shall have to wait and see.