Published by The Folio Society.

All illustrations from The Folio Society edition of 2001: A Space Odyssey. 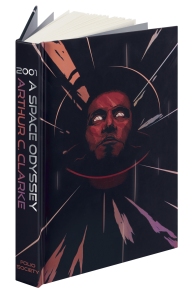 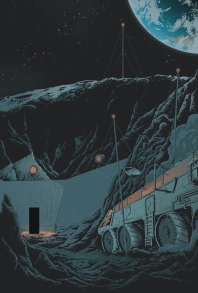 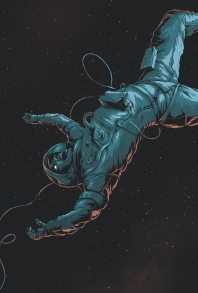 2001: A Space Odyssey is a long film. Having experienced both it and the actual year 2001, it must be said the film seemed the longer of the two.

In summary: Music. Prehistoric ape men throwing bones into the air. Spaceships moving very slowly to classical music. Leonard Rossiter. The excellent HAL shutdown sequence. The space baby bit which nobody really understands. Many hippies came away in 1968 thinking they had seen the best film ever made. Perhaps they were right. No one had after all, seen Timecop then.

Some muse that the film proves that director Stanley Kubrick helped fake the Apollo 11 moon landings the following year. This seems unlikely. Kubrick was after all a very meticulous director, famous for insisting upon multiple takes. If he had been hired to film the moon landings, they would probably still be being filmed.

This is not the film, however, it is Arthur C. Clarke’s much more palatable book, illustrated for the first time (by artist Joe Wilson). It is not a predictive text. Having cleverly predicted the moon landings would be in 1970 (he made the prediction in 1945 and was only one year out!) Clarke seems to have been about a century out at least in predicting how advanced we would be by 2001. Anyone hoping for the discovery of a giant space baby in that year would have been sorely disappointed.

But this is ultimately an enjoyable and nicely illustrated read. Scoring it out of 2,500, I would unhesitatingly give it…2001.